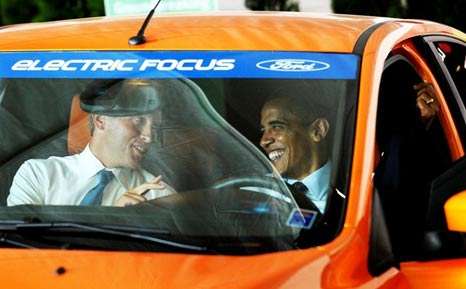 Obama Administration unable to follow through on green car promises

According to the U.S. General Services Administration purchase records, the purchase of hybrid and electric models dropped by 59% in 2011, making up only a small percentage of the federal government's total vehicle purchases.
Advertisement

President Barack Obama and his administration promised last year to follow through on two goals: having only alternative fuel vehicles in the U.S. fleet's purchases by 2015 and getting one million electric vehicles on the road by that year. As it turns out, the road to those goals is rockier than the president or his staff may have realized.

Consumers of green vehicles have learned already that if your only goal for purchasing a car is to be "green," then you have limited choices and options. Although the government has promised to "lead the way" on alternative fuels and vehicles, emphasizing electric and hybrid-electric cars, it's not exactly following through. With costs and availability getting in the way, the U.S. General Services Administration (GSA), which purchases all of the government's fleet - with the exception of the U.S. Postal Service fleet - for federal use, has resorted to meeting the mandate not by asking manufacturers to raise production levels or by emptying car lots, but instead by choosing the most available, but arguably least "green" of the options available to meet the mandate.

Instead of purchasing hybrids and electrics, the GSA has instead turned to E85 ethanol "flex fuel" vehicles which are capable of running on up to 85% ethanol (15% gasoline) mixes. "Up to" is the important factor, since they can also run on gasoline only and with only about 2,500 E85 pumps in the United States, out of 162,000 total fueling stations, there are fewer E85 pumps than there are public electric charging stations - there are about 6,000 of those. All according to another government agency, the Department of Energy.

Yet turning to ethanol vehicles has enabled the GSA to meet the White House mandates for "clean vehicles" despite the huge down sides that ethanol has. In the United States, nearly all ethanol is made from corn in a process that is, at best, emissions-neutral given the amount of energy (mostly petroleum) required to plant, grow, harvest, and process corn-based ethanol. Added to that, ethanol-burning engines are about 87% as efficient as gasoline-based due to the lower energy density of E85. This may be offset by emissions, but some arguments are that when the energies (gallons per mile) are equalized, there is little benefit to corn-based ethanol as a fuel. All of which assumes the vehicle is being filled with ethanol, which the above pump numbers show is an iffy prospect. 2010 numbers show that 55% of federal employees assigned E85 vehicles were given waivers to use regular gasoline as ethanol was not available to them.

Most of the photo opportunities taken during the Obama administration's green fleet initiative tours last year included electric and hybrid-electric vehicles, such as that shown in the White House photo included here. Yet the GAO reports that its hybrid and electric vehicle purchases dropped by 59% last year, to only 2,645 vehicles while 32,000 E85 flex-fuel vehicles were added. A total of 54,843 vehicles were purchased last year by the GSA.