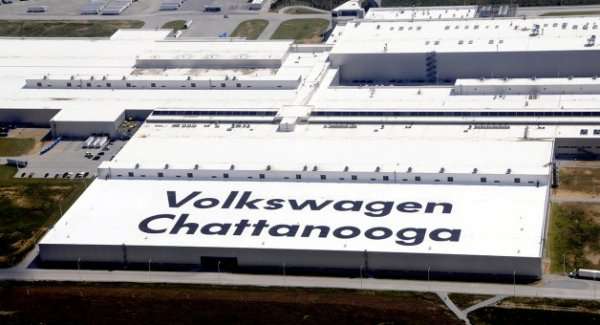 No Valentine between VW employees and United Auto Workers

Volkswagen employees in the Chattanooga, Tennessee plant have voted against representation by the UAW in a historic vote that was marked by a lot of media attention and some often questionable statements from the peanut gallery on both sides of the debate. Many things can be learned here.
Advertisement

About 1,500 workers were eligible to vote on the historic measure that would have put the United Auto Workers union in charge of representation for them at the Volkswagen plant in Chattanooga, Tennessee. About 89 percent of those eligible workers voted by the time the polls closed today, says VW in a release, with the initial tally showing that 53 percent of the votes were not in favor of the UAW.

The voting was conducted by the National Labor Relations Board starting on Wednesday, February 12 through to today at 8pm local time. The NLRB has not given certified numbers from the voting, but they aren't expected to be much different from what VW has announced officially. The secret balloting process had nearly 1,000 employees voting on Wednesday with the rest trickling in through this evening.

So far, VW has used "work councils" in a round table meeting format used in many parts of Europe as a way of mitigating employee concerns and management needs. The American-style works councils are unique, but not that much different from some of their counterparts over the pond. According to this vote, those councils seem to have been doing their job.

The struggle by UAW to find relevance in today's automotive industry has continued as membership has plummeted 79 percent since the union's heyday in 1979. Both sides of the debate - especially those who are not directly invested in the unionization of the plant - were often at odds in games of dirty pool and misinformation.

Sebastian Patta, Vice President for Human Resources, said: "While there was intense outside interest in this election, our managers and employees inside the plant maintained high quality production and continued to work together in a calm and respectful manner."

This may be true in the plant itself, but out on the streets and on local and national airwaves and newsprint, it was a different story. Billboards against the unionization of the plant pictured one of the UAW's logos with the word "Auto" scribbled out and "Obama" put in its place, making it United Obama Workers. Talk radio hosts decried the union as just another communist threat to America while politicians jumped in to claim that bringing in the UAW would destroy Tennessee's economy.

On the flip side, the union itself was campaigning heavily on a disconnected and ineffective plea to help other employees around the world by joining the UAW today in Tennessee. Some news and talk shows nationally, from as far away as Southern California, claimed that the vote to instill the union was the most important thing to happen in the "repressed South" since Lincoln gave the Gettysburg Address, feebly trying to tie the union to the presidents of past and present.

The reality is that automotive unions are a dying concept. Today's climate doesn't seem conducive to a need for unionization on the scale that might have been required in the first half of this century and the contentious 1960s. It could be argued that the UAW had no small role to play in the destruction and near-death of two of America's oldest automotive manufacturers and the near-bankruptcy of its third. The fact that newcomers to this nation are building plants outside of the union's influence and then, by all accounts, treating their employees well despite the lack of unionization seems to baffle many people - mostly those who have never known anything else and apparently haven't read anything penned by Henry Ford or worked a job that required more than a latte and a desk.

The fact is, we live in a world of instant-information on all subjects, all the time. News no longer arrives on a daily cycle of overnight and afternoon. It comes at us 24/7/365. Twenty years ago, most of us would never have known much, if anything, about civil war in Egypt or peaceful government reorganization in Iceland. In fact, thirty years ago, the votes tallied today in Tennessee would have been nothing more than a local blurb were it not for the Internet and the reach of our always-on infotainment world. Snow storms in Atlanta would not be the joke of Michigan and Montana except that the reality-show appeal of the photos appearing on our online social networks make it so.

In a world like this, where information is instantaneous and its spread can happen in a matter of minutes or hours instead of days or weeks, it's tough for a company as vast as an automaker to cheat its employees, treat them like dirt, or greedily steal their pensions to line executives' pockets without facing the wrath of consumer boycotts and potentially career-destroying PR disasters.

Do unions have a place? Sure. Is it as big and important as they might want it to be, looking back nostalgically at the glory days of the 1970s? Not likely. It's probably mostly as a third party escrow for pensions and not much else.

Unions are a product of and are most useful in emerging economies where the switch from agrarian to industrial is underway. That sort of fundamental shift from one type of lifestyle to another affects individuals and whole societies in a big way. In our own country, we saw that change happen in a matter of a generation. Within two or three more, the whole paradigm of our national outlook in terms of how we viewed making a living had changed. By the time the "robber barons," who'd actually saved the whales (think kerosene), were called evil thieves in the everyday vernacular by those who wore t-shirts proclaiming that we should save the whales (likely while wearing sandals made in countries where killing whales is still legal), the shift had been complete. Unions serve a purpose, but eventually, they become outdated and unneeded as the paradigm within the company that was the union's impetus is changed.

The vote in Tennessee shows that. Even with the unprecedented access VW gave the UAW to workers, those workers at the VW plant in Chattanooga were unconvinced that they needed the UAW to call the shots for them.