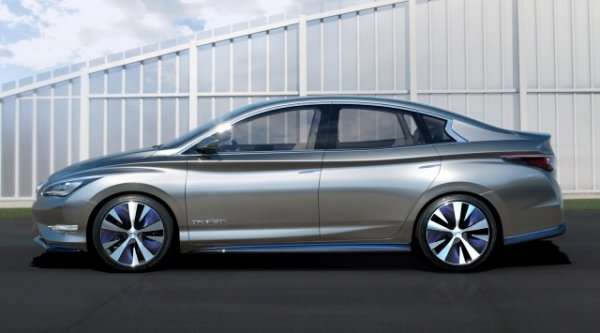 At the 2014 Beijing Auto Show, Nissan big wig Andy Palmer let loose some details on the plans the company has for the LEAF and the planned Infiniti branded electric vehicle.
Advertisement

Andy Palmer is an executive vice president at Nissan and is the company's Chief Planning Officer (CPLO). He oversees global product planning for Nissan as a whole, including Infiniti. He reports directly to Chief Executive Carlos Ghosn. Basically, when he talks about something, you can accept it as being from the top-most level at Nissan.

So when Palmer talked about zero-emissions vehicles in Beijing, it was worth listening to. It's taken a while, however, for what he said plus a few other details regarding where Nissan appears to be heading to come together and give a more complete picture of the EV plans the company seems to be aiming for.

From Beijing, we know, thanks to Palmer, that new battery chemistry for the LEAF system is in the pipeline and will be on the market on or around 2017. Given product cycles for vehicles at Nissan, that would be about the time the LEAF is up for another revamp (going from either the 2011 introduction date or the 2013 global production date), so the timing makes perfect sense.

That same year, Palmer let drop, will see an Infiniti-branded electric vehicle. It may be a production-ready concept or it may be a production car, but either way, the VP made it clear that it would be a vehicle that the luxury brand will be selling. We can guess it will be another iteration of the above-pictured 2012 Infiniti LE concept.

2017 is a big year for Nissan, as it is also when their Power 88 business plan completes (slated for the end of fiscal year, March 31). This likely ties into their plans for battery upgrades since by then, production of EV batteries at Nissan (globally) will be well underway and likely approaching half a million units per year or more.

So what does this mean? Given the recent things coming from Nissan, including their internal talk about battery options (discussed earlier), and Mamoru Aoki (global design chief) making statements about the Tesla Model S being an "authentic" car while the LEAF is "aiming too much at an EV-like appearance," we can guess that the new design for the Nissan LEAF will be more mainstream than it is now. You can take that as a good or a bad thing.

For Infiniti, we can guess that the design will definitely be more contemporary and likely sedan-shaped rather than a hatchback. Possibly on the new Eau Rouge track as this seems to be their plans for a halo car.

Finally, we can assume, given Nissan's way of doing things, that the next-generation batteries will probably show up in the Infiniti model (at least when the batteries are revealed) first. The company is working hard to make that brand its "cutting-edge" centerpiece.