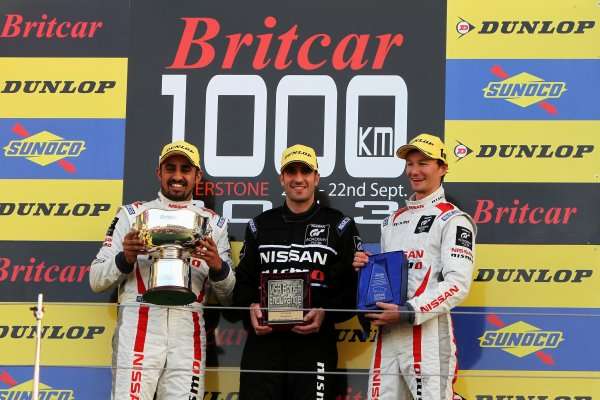 Nissan teams have won at both Silverstone in the UK and Austin, Texas this weekend, as G-Drive and the GT Academy capture flags for podium-filling wins.
Advertisement

This weekend, Nissan race teams took to the track at several events, including the much-anticipated finale runs in Europe at Silverstone, the Nurburgring, and here in the states in Austin, Texas. The results were very good for Nissan.

Starting here at home, the latest Le Mans races took place at the Circuit of the Americas in Texas, where the G-Drive Racing Team in the No. 26 Oreca Nissan took the Le Mans P2 win, capping their win in the last race in Brazil for a two-fer. Second place was taken by another Nissan team, Pecom Racing, in the P2 Teams title race.

"The drivers, the mechanics, the engineers, in fact the whole team did a perfect job," said race winner Roman Rusinov. "It was very important for us to start from pole position as we knew our car was not the fastest this weekend and we've done it! This is our second win in a row and I am very satisfied with the result. I hope we can continue this winning momentum when we travel to Japan."

These FIA races are part of the World Endurance Championship series, with the next in the series taking place in Fuji, Japan on October 19 and 20 which will also be the debut run for the Nissan ZEOD RC electric racer in a series of demonstration runs prior to its FIA entry next year in Garage 56.

In Europe, Nissan's GT Academy teams racing at Silverstone took their 370Z cars to the win at the Britcar 1000kms. 2012 GT Academy winners Ashley Oldfield and Salman Al-Khater as well as GT Academy head judge Tomas Scheckter captured silverware in the UK. This was the first major test of Oldfield and Al-Khater's skills on the international competitive circuit as NISMO Athletes. They won the class win, production win, and eighth overall.

"I feel so happy," said Salman. "It was a great race and it was the first endurance race I have done and I really enjoyed it, especially because of all the time you get in the car. To be on the top step in our first race after the driver development program feels really good. Thanks to Nissan, to GT Academy and to the team. It has been a great day."

"I'm really happy that we could get the victory in our graduation race," added Ashley. "It wasn't easy and it looked like we might not get it for a bit but we did it in the end. I'm really stoked!"