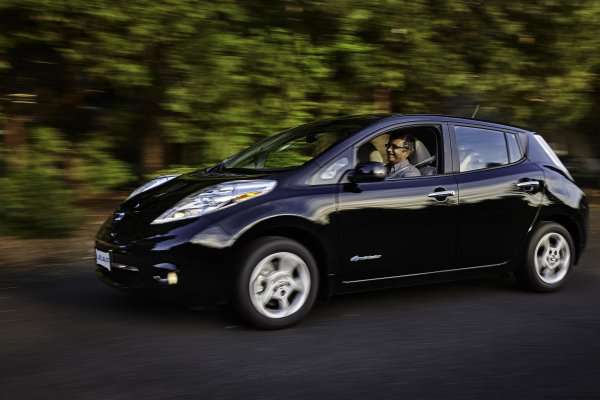 A family in Portland, Oregon has purchased the 75,000th Nissan LEAF to be sold in the United States so far. What's more, it's the family's second all-electric LEAF after trading in a lease.
Advertisement

The 75,000th LEAF was sold to Rishabh Mehandru of Portland, Oregon, who is a senior engineer at Intel with a commute of about 30 miles. This is his second LEAF in three years, the other being a lease purchased two years ago. Mehandru originally purchased the electric car to reduce his emissions footprint.

"I'm a runner, and when I ran outside I found that I was inhaling a lot of exhaust from the gas-powered cars that passed me on the roads," said Mehandru. "I instantly became aware of the amount of fuel I was burning, and that's when I first decided that I wanted to get an electric car." "When the lease was up on my first Nissan LEAF, I knew that I didn't want any other car. I had to have another Nissan LEAF," said Mehandru. "I love how quickly I can get up to speed on the highway—even my three-year-old son notices how zippy it is—and I like that I don't have to stop for gas."

Like most Nissan LEAF owners, of course, Mehandru has convinced friends and colleagues to also consider the car. Nissan calls this the "cul-de-sac effect." Most LEAF cars are sold to people who've seen, test driven, or ridden in a friend's car.

The black Nissan LEAF sold to Mehandru was sold through Carr Nissan in Beaverton, Oregon by Clint Edwards, sales manager at the dealership. Edwards says that many LEAF buyers are current owners looking to upgrade to the latest model or ready for a second electric car. "We see a fairly even mix of new and returning customers, and it's equally exciting to work with both groups," he said.

Tesla Contemplates A New Strategy for China Retail even As Sales Boom
Jay Leno on Elon Musk & EVs: “I Think He Should Get ... Credit"
END_OF_DOCUMENT_TOKEN_TO_BE_REPLACED