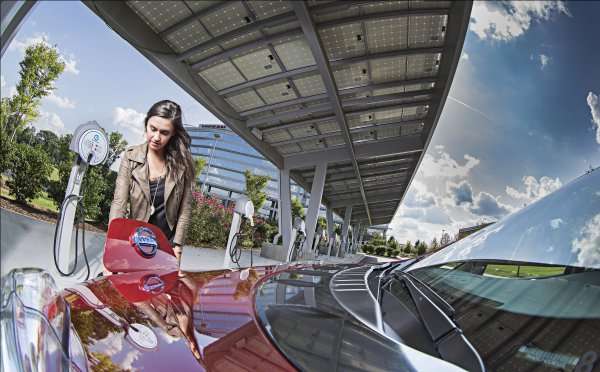 The battery-electric Nissan LEAF was the only car given an IHS Award this year, being presented at the Automotive News World Congress in Detroit. The IHS Automotive Loyalty Awards are fact-based accolades given based on a manufacturer's and model's ability to retain owners over repeat buying cycles. For this reason, they are coveted by carmakers as proof that their products resonate with their customers even after the "newness" has worn off.

The Nissan LEAF, of course, is the best-selling electric car in the United States, North America, and the world. Last year, it broke its own sales records with 30,200 units sold in 2014.

Nissan attributes the LEAF's success to its versatile nature and general appeal to consumers. "Since entering the market in 2010, the Nissan LEAF has steadily gained supporters throughout the U.S.," said Toby Perry, director of marketing for Nissan LEAF. "While the majority of original buyers were electric vehicle enthusiasts, we're now seeing more and more 'regular' car buyers fall in love with LEAF because of its many financial benefits, fun-to-drive nature and roomy interior. Our LEAF fans are some of the most loyal customers in the world, and we're thrilled to see that validated with this IHS award."

IHS Automotive analyzes loyalty throughout the year and regularly works with its customers to effectively manage owner loyalty and conquest efforts through in-depth research and analysis of automotive shopping behaviors, related market influencers and conquest and retention strategies. Loyalty is determined when a household that owns a new vehicle returns to market and purchases or leases another new vehicle of the same make, model or manufacturer.

Of note, the only other electrified vehicle on the IHS list this year was the Lexus CT200h, a hybrid.

mike w wrote on February 6, 2015 - 7:19pm Permalink
Owner loyalty? Are they kidding us. I and 14,000+ other people went out and bought a Nissan's Leaf during the 2011 and 2012 model year. The batteries in these car are literally dying on us as we drive down the road. My leaf with less than 9000 miles is already down 2 bars and I live in Virginia not the south west USA. There is no way I'm going to buy another one of these cars!!!!. The EV experience is NOT exclusive to Nissan. For a few dollars a month more you can get a Chevy VOLT, a BMW i3 a Ford Focus EV or Kia Soul EV.
Aaron Turpen wrote on February 7, 2015 - 1:24pm Permalink
Funny since the LEAF is one of the highest owner-retentive cars in the country. Most who lease one lease another when their lease is up and many who buy are buying again or buying a second one. So your experience is out of the ordinary. You should also look into the extended warranty Nissan added as part of the settlement made over the battery loss claims.
Wayne wrote on February 7, 2015 - 2:13pm Permalink
I researched before I bought a used 2011 Leaf. In northern states, the amount of bad batteries people complain about seems to be at a rate one would see as normal manufacturers defect. It seems the older Leafs do best in temperate zones. Here in the northwest it rarely gets above 90deg, and then only for a few days every two or three years. It doesn't snow very often either. Ideal conditions for the older Leafs. I checked the battery state with leafspy and an ODBII bluetooth adapter, and it was in premium condition. The car had a little over 20,000 miles, and was a very good price. It's been running like a champ, and as we both live and work in Seattle, it rarely needs to be charged over 80%. The main thing about the first gen cars like these is that they have limited range. The worst you'll get is around 40 miles. Make sure that your normal driving day is no more than that before considering purchasing one of these, and make sure it's not your only car unless you don't mind renting a car for long trips. If the next gen cars have a 200 mile range like they are promising, I can see most of the range problems with the cars going away. The issues with batteries have been dealt with every year incrementally as data from all of the cars sold has been collected and analyzed.
mike w wrote on February 7, 2015 - 6:39pm Permalink
Aaron. Can you provide a link that shows what the final settlement was? I have been watching and contacted the plaintiff's council several time but got no reply. The last I saw of this issue was the battery capacity loss warranty at something like half the advertised life expediency. I never opted out of the settlement and have received nothing regarding this issue in over a year. thanks
mike w wrote on February 7, 2015 - 7:39pm Permalink
The Leaf may have one of the highest owner-retentive score but the Chevy Volt and Tesla Model S beat the leaf by a bunch in JD Powers and consumer reposts eyes. Not trying to be smart but we knew right away something was wrong with the battery in our Leaf. After filing complaints with Nissan when we lost our first BAR at 1 year and 3500 miles we knew we got a bad battery and Nissan insisted that "Excessive Capacity loss" did not exist they never even heard of it. . Had Nissan stepped up to the plate and gave me the battery I paid for my attitude would be the opposite of what it is now.
Aaron Turpen wrote on February 8, 2015 - 11:46pm Permalink
Cannot link in comments, Mike. The settlement was reached in 2013 and finalized in August of that year. If you joined the class action lead by KCC then, you would have already received your settlement.
mike w wrote on February 9, 2015 - 5:41pm Permalink
Yes the leaf battery was approved but never finalized AFAIK. These was a judge that objected to the proposed settlement and it has been stalled in the courts ever since. These was no mention of an "Extended warranty" but there was talk about a Capacity Loss" warranty. AFAIK there has been no mention from the plaintiffs council or any articles in any of the green car web sites mentioning a finalized settlement. Could be wrong but thinking not..