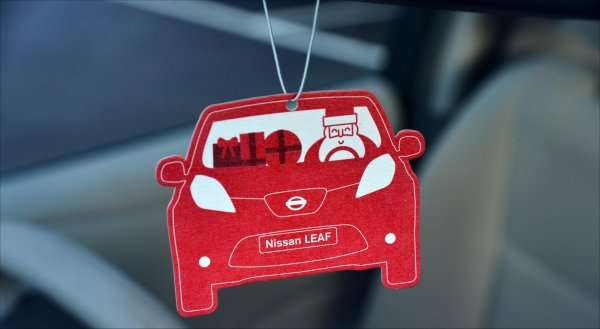 Nissan creates 'scent of the future' - are they mad?

Nissan of Europe has decided to create a new kind of "new car smell," the "scent of the future," as a way to promote the Nissan LEAF electric car. Madness you say?
Advertisement

Let's say you sell the world's best-selling electric car. But you want to make it more marketable to the buyers who sit in it. What do you do? You could improve the car's performance, range, aesthetics, or any of a number of other things about the car. All of which are sometimes good selling points, but are points that usually have to be shown to the customer and explained first.

Or you could change how it smells.

A scent researcher in Switzerland was hired by Nissan to come up with the "smell of the future" for zero-emissions vehicles. That man, a world-renowned master perfumer, claims to have done that. If we weren't talking about Dr. George Dodd of the Aroma Academy, then maybe we would not be serious about this being something to talk about.

But we are talking about Dr. Dodd and we are serious. Think about this. The guy's job is to come up with scents that elicit emotions. Those might be lust, happiness, or well-being. Now consider the oddly familiar, but still often wince-able "new car smell" we all can name and remember, but not necessarily describe.

Right. That's the idea here. Check out the video to find out more. Pretty amazing idea.

The scent he's come up with will be embedded into a leaf-shaped air freshener (shown) and given to electric car fans, LEAF customers, and Nissan employees in Europe as a Christmas gift.

"We are very proud to have been asked to create such an abstract and innovative scent with Nissan. When Nissan came to me and asked me to create a scent of the future it was quite a scary thought, but it was a challenge I thoroughly enjoyed. This bespoke, futuristic aroma embodies a palate of smell sensations that have never before existed together and represents a future Nissan is helping us drive towards."

bruce dp wrote on December 15, 2013 - 11:18pm Permalink
-Item is destined for Europe only- So, what about the Americas? What are we, chopped liver? Excluding the ad campaign from that huge Leaf customer and potential buyer base, was short sightedness.