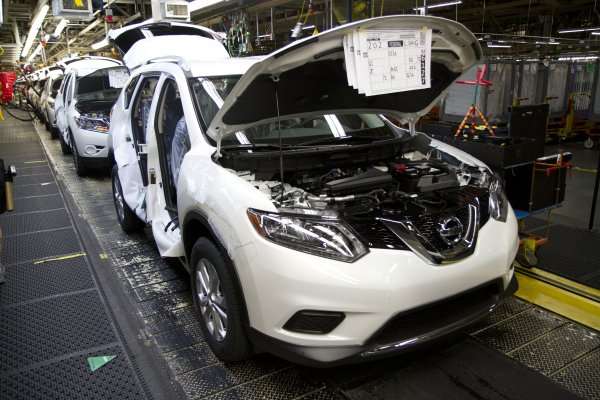 Nissan's Smyrna, Tennessee plant has built its ten millionth vehicle as it begins rolling 2014 Nissan Rogue crossovers off its line as the fifth core model to enter production at the company's U.S. headquarters. Plant production expansion continues as jobs are added to the lines.
Advertisement

In the past fifteen months, or just over a year, Nissan's Smyrna, Tennessee plant has seen five new vehicles added to its production line - a line that has already built ten million vehicles to-date. These are all core models that are part of the company's core volume of sales and are part of Nissan's "product blitz" as the company refreshes more than three quarters of its showroom volume sellers.

Shifting Rogue production to the U.S. was a priority for the company, whose broad production strategy is to build vehicles where they're sold to both blower costs and keep economies at home. By 2015, Nissan wants to have 85 percent of its products sold in the U.S. be produced in North America. Towards that end, they have built more than ten million vehicles on their Smyrna, Tennessee production lines alone.

"Momentum continues as we add new products, jobs and investment to our U.S. manufacturing operations," said Susan Brennan, Nissan's vice president of manufacturing in Smyrna. "For more than 30 years, the Smyrna plant has been building high-quality vehicles, and today's milestone serves as further testament to the flexibility, efficiency and talent of our U.S. workforce."

Of the vehicles being built in Tennessee, the Nissan Altima has been the largest volume vehicle so far and is Nissan's flagship sedan. Since production of the car began in 1992, over 3 million units have been built there. The Frontier pickup truck is another hot seller and is the longest-running vehicle in Nissan's U.S.-made lineup, starting production in Smyrna in 1983 and seeing about 2.75 million units built there so far. Many other easily-recognized Nissan vehicles are also made in Tennessee, including the Xterra SUV, the Sentra and Maxima sedans, the Pathfinder SUV, and the best-selling electric Nissan LEAF.

"The consistent sales growth of Rogue has made it one of the superstars of the Nissan lineup since its launch in 2007," said Fred Diaz, divisional vice president, Sales and Marketing, Service and Parts, Nissan U.S.A. "Now Nissan's second-best selling vehicle, we will look to the all-new Rogue to cotinue its momentum and help drive the brand's sales to the next level."

Nissan's plant in Smyrna, Tennessee employs more than 7,000 people and has an annual payroll of over $275 million. It is now the nation's largest automotive lithium-ion battery plant and began supporting production of the LEAF this year. Nissan continues to hire to fill in shifts and support roles at the assembly plant as well as its engine production plant next door, and is also expanding its Mississippi production operations.