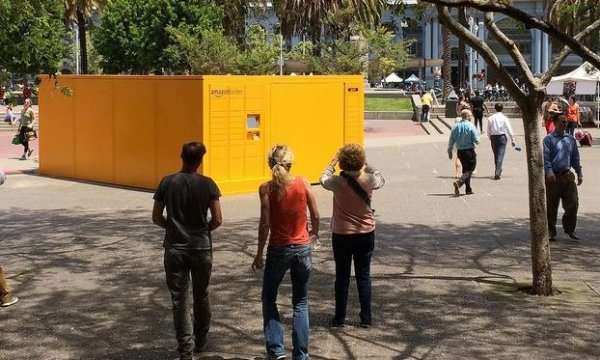 A giant, mysterious Amazon locker was placed in Justin Herman Plaza in San Francisco where passersby wondered what it meant. Turns out, the brave at heart could actually win something big.
Advertisement

Nissan is continuing its grassroots outreach to the public in conjunction with Amazon. While deliveries of Nissan vehicles, specifically the Versa Note, through Amazon were publicized heavily a few months ago, now they're trying something new: bring people to the product instead.

Amazon has Lockboxes it places in key areas where people work and play so that customers can choose to have their purchases delivered to the box for convenient, anytime pickup rather than to their doorstep or mailbox, where theft or loss might be a problem. These lockboxes vary in size and shape and have special codes that only the customer will know for opening their box to retrieve their items.

Amazon placed a gigantic lockbox in Justin Herman Plaza for Nissan to use. The box, measuring 16 by 20 by 8 feet, had several lockers built-in along with one huge locker containing something special for one lucky winner. The box was emblazoned with Nissan logos and left there in the park with no explanation.

Passerby took photos of themselves with the box along with the hashtag #GiantLocker, which was the only instruction written on the box.

Nissan then randomly chose tweets from the hashtag and on Friday morning, they began sending special codes to open various lockers on the box to winners. Boxes contained gift cards, game consoles, Amazon Fire TV systems, Kindle tablets, and more. Then, last night, one very lucky person got a code that very likely changed their life. It opened the big locker on the box, which contained a brand new 2014 Nissan Rogue.

The winning announcement went viral, with social media and blogs from the San Francisco area lighting up with the surprise announcement that someone had won a brand new Rogue from the mysterious box.

What do you think? Is this a great way to reach out to customers and their social media contacts in a grassroots way?