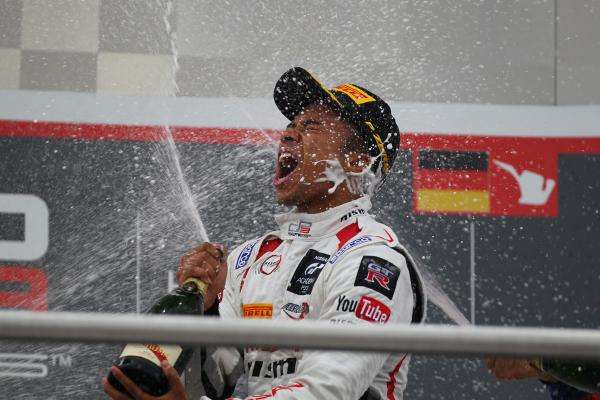 The weekend's races in Hockenheim, Germany, were exciting showcases of single-seat speed and piloting. The star of the weekend, for NISMO, was sim-to-win GT Academy winner Jann Mardenborough (above) who competed in GP3 against the best of the best at Germany.

Jann's performance was nearly flawless, taking the pole position in race two (after winning 8th in race one) and then using that to continue a near-perfect circuit in the Arden Motorsport Formula car to win the GP3 checkered flag. For the young upstart, this race is important as it's considered one of the important entrance races for aspiring Formula One drivers and it builds on his impressive performance last month at the Le Mans 24 Hours. It also erases his disappointing circuit at home in Silverstone two weeks ago.

According to Jann, it's been all about learning tire management. "The tire wear on Saturday was amplified by the heat, so it was good that the team had drilled all this information into me and I was able to manage the situation."

Meanwhile, his teammates Sebastian Vettel and Daniel Ricciardo took fourth and sixth in the German Grand Prix. At the front, Nico Rosberg took a fourth win of the season ahead of Williams' Valtteri Bottas. With the leader finishing 20 seconds ahead of the Finn, though, we had to look further down the order for excitement. Lewis Hamilton in the second Mercedes delivered his share, powering through from 20th on the grid to third at the end of the race. Behind the podium finishers, Sebastian enjoyed another superb battle with Fernando Alonso. It was a fight that was joined in the closing stages by Ricciardo, who, after being passed by the Ferrari driver on newer tires, fought back to finish just eight hundredths of a second adrift of the double champion.

The race, though, was excitement from the start as the lights going out resulted in the drivers hitting the grid fast, resulting in an immediate collision with Williams driver Felipe Massa and McLaren driver Kevin Magnussen colliding, resulting in a spectacular barrel roll by Massa, who emerged unhurt but out of the race. The resulting jumble had evasive manuevers pushing Ricciardo to fifteenth place, but he spent the first half of the race regaining position to fourth. McLaren's Magnussen returned to the field in last place, after a pit repair.

As for Vettel's race, he was third-and-fourth against Alonso for most of the race as the champions battled throughout. Strategic pits for tire swaps and a lot of wheel-to-wheel racing marked this German Grand Prix.

Easily one of the best races this year. Ricciardo branded the race "awesome fun."