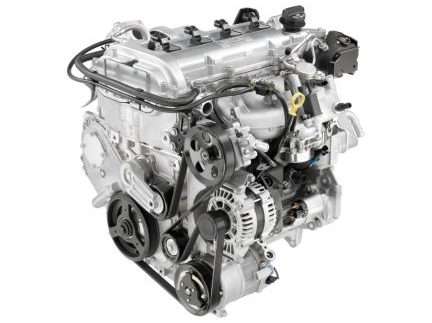 The 2013 Chevrolet Malibu will feature a new GDI Ecotec 2.0L turbocharged engine, becoming one of the most power-dense offerings in the industry.
Advertisement

General Motors will be offering a new gasoline direct-injected (GDI) Ecotec 2.0-liter turbocharged engine in the upcoming 2013 Chevrolet Malibu. The engine is rated at 259 horsepower and will be one of the most power-dense engine offerings in the industry today.

The engine's muscle stems largely from the twin-scroll turbocharger, which generates up to 20 pounds of boost, optimizing power delivery across the RPM band. This also broadens the torque curve, delivering 90% of peak torque across RPM ranges of 1,500 to 5,800 - the areas where most of the work of an automotive engine happen. This improves efficiency and power delivery for the driver, offering more refinement to the acceleration line and reducing downshifting.

The tiny four cylinder engine allows the Malibu Turbo to go from 0 to 60 miles per hour in only 6.3 seconds and achieve a top speed of 155 miles per hour. At the same time, it has been EPA rated at 21 mpg in the city and 30 mpg on the highway.

The 2.0T is a part of the all-new Ecotec engine family, another of which, the 2.5L, will also be available in the Malibu. Ecotec engines are the latest in GM's turbo engine technology developments, meant to enhance performance, durability, and driving refinement. Increased efficiencies come from several engineering changes, including friction reduction through in-built accessories such as the new Ecotec variable-displacement oil pump.

The Ecotec line is GM's entry into the new field of higher-compression gasoline engines, which includes SKYACTIV engines from Mazda and EcoBoost engines from Ford. As these technologies improve, engines will continue shrinking as power outputs increase - meaning displacements will shrink, but the amount of horsepower and torque delivered will not.