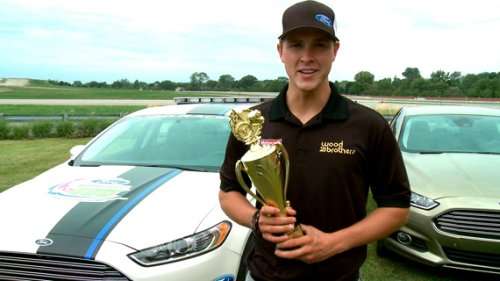 Ford's NASCAR stars faced off in a challenge that defied all their expertise by asking them to lay off the accelerator and maximize fuel savings instead of speed. The results were amazing.
Advertisement

Normally, NASCAR is associated with speed and the drivers who ride behind the wheel are often noted for their ability to not only control their cars, but do so at high speeds and with little regard for fuel economy.

What most race fans aren't aware of is that professional race drivers in NASCAR and similar long-duration races spend a lot of time learning how to best maximize fuel economy while holding those top speeds. In races on the big oval, after all, fewer pit stops for fuel means more time getting ahead of your competitors.

Ford decided to see how far its NASCAR stars could go with the 2013 Fusion EcoBoost's fuel miser technology. So they pitted drivers Trevor Bayne, Greg Biffle, Matt Kenseth, and Carl Edwards, all champion drivers in their own leagues on the Ford Racing Team, against one another on the track. Each was given a 2013 Ford Fusion which Ford has projected will reach 37mpg on the highway in EPA testing, and turned them loose to try to beat each other in timed trials where the winner would be determined not by speed, but by fuel savings.

The Ford Fusion EcoBoost NASCAR Miles Per Gallon Challenge started with Kenseth achieving an amazing 46.2 mpg on his run. Biffle's instincts got the better of him with a punchy start off the line, knocking his results down to an even 46 mpg despite his best efforts to hold speed without wasting fuel.

“Luckily,” he said at the finish line, “I think both Edwards and Bayne will have major trouble not accelerating when they see the green flag wave, so I think I’m looking at a second-place finish.”

He was wrong. Edwards couldn't stand the heat and ran the air conditioner in his Fusion during his laps, knocking his results down to 42.2 mpg despite a well-executed feathered start and careful speed management throughout.

Ultimately, though, it would be Bayne, the 2011 Daytona 500 winner, who would steal the show with his posting of 46.9 mpg to take the trophy. Afterwards, he said he drew on his recent experience "coasting" his pickup truck to a station when the empty light came on. He combined drafting techniques with careful nursing of the accelerator to make the pump.

While maybe not quite as exciting as a Sprint Cup or Daytona 500 race, Ford's MPG challenge at its Dearborne test track shows that with diligence, even those celebrated for their speed can be eco-conscious.

Tesla Contemplates A New Strategy for China Retail even As Sales Boom
Jay Leno on Elon Musk & EVs: “I Think He Should Get ... Credit"
END_OF_DOCUMENT_TOKEN_TO_BE_REPLACED