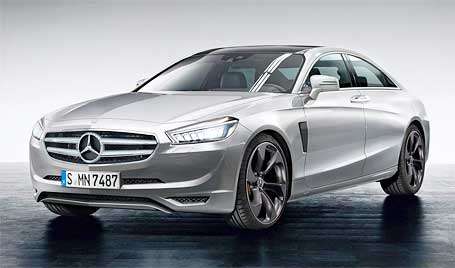 Mercedes E Superlight to be a fuel cell car, coming in 2015

For months now, rumors have been circulating that Mercedes-Benz was working on a carbon-fiber-bodied sedan based on the E-class that would reduce weight radically while improving performance and fuel efficiency. Enter the Mercedes E Superlight, which will first release as a production hydrogen fuel cell vehicle (HFCV) in 2015.
Advertisement

The small amount of information that Mercedes-Benz has released so far on this car is noteworthy for two reasons: the radical new structural design and materials it will have and the fact that Mercedes is nonchalant about the information that they will be releasing it as a fuel cell vehicle first, rather than as a limited production afterthought.

The Carbon-Fiber Car
The E Superlight will be made almost entirely of carbon-fiber materials. The body and frame is based loosely on the next-generation E-class design as a 4-door saloon. Rather than the aluminum architecture envisioned for the other E-class models expected in that year, Mercedes is instead going entirely with a carbon-fiber monocoque that fully integrates suspension and drive train with its mold.

The car will have noteworthy design elements such as suicide doors with no center B-posts. The strength of carbon means that those posts aren't needed to maintain the integrity of the roll cage. In fact, a lot of elements normally present in a steel or aluminum car's framing and underlayment are not needed when designing from the ground up with carbon fibers.

This is literally all that Mercedes has said about the car's propulsion system. Their ongoing work on fuel cells, however, shows that they are well on their way towards production-ready cells.

More Production Plans
Mercedes also says that after the initial year of E Superlight production, they will increase production numbers to match the market at large and by 2017 will likely be at 20,000 vehicles annually. By that point, other power trains may also come to market, such as diesel, plug-in hybrid (no specification gasoline or diesel), etc.

This carbon framework is expected to extend to other models, including the SLS sport coupe.

2015 Is the Magic Year for Fuel Cells
This tells us which vehicle Mercedes-Benz will be marketing as an HCFV in 2015. Most other major manufacturers, including Honda, General Motors, Toyota, etc, have also announced that they will be releasing production model fuel cell vehicles in 2015. Some, like Honda, are going for the smaller car market with FCX Clarity while others, like Toyota, are going for the larger vehicle market with their SUV HFC tests.

Hyundai has promised to beat the other companies to market by two years, slating next year (2013) as their release year for a limited-production fuel cell vehicle, in an SUV, and ramping up to full production within 2 years.