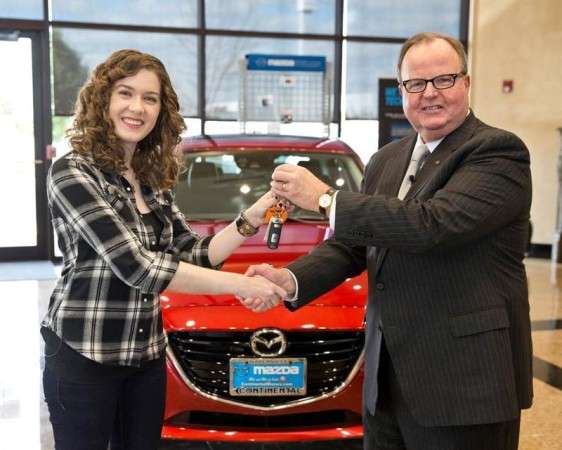 Mazda sells 10 millionth car in the U.S. to a guitar teacher in Illinois

26-year-old Lauren Carter became Mazda's 10 millionth American customer when she purchased an all-new 2014 Mazda3 in Naperville, Illinois. Lucky for Mazda, she is exceedingly photogenic too.
Advertisement

Mazda began selling cars in the United States in 1970 and since then, has sold ten million vehicles here, with the 10 millionth being a 2014 Mazda3 to a customer at its Naperville, Illinois sales floor, Continental Mazda.

The buyer, Lauren Carter, is an accounts receivable specialist and part-time guitar teacher who says she wanted a car that would fit her lifestyle and growing business. She needed great fuel economy, a car that was fun to drive, and something that looks sporty. She conducted some research online and by asking friends and family before settling on the Mazda3. This would be her first new car purchase, so she was very careful in her choice. What she didn't know is that when she stepped into the dealership after her test drive and signed the purchase agreement, she became the owner of the ten millionth Mazda sold in the U.S.

“Mazda’s cars are designed for people who are looking to get more out of their vehicle… The Mazda3 is fun to drive and I can fit my guitar and amplifier in the trunk. For me, there’s nothing better!” said Lauren Carter, Mazda’s 10-millionth customer, about her purchase.

Mazda North America CEO Jim O'Sullivan flew to the Illinois dealership to present Lauren with her keys. “We are honored to work with Lauren and are glad she is part of this occasion. We couldn’t be any happier that she chose Mazda as her first new car,” he said. ”The next 10 million will be accomplished by defying convention, continuing to push the limits of engineering and infusing every vehicle Mazda builds with the soul of a sports car.”

The newly-redesigned 2014 Mazda3 achieves 41 mpg on the highway and includes a full suite of SKYACTIV technologies, including new Mazda offerings like the Active Driving Display, i-ELOOP regenerative engine braking, and an advanced suite of i-ACTIVSENSE safety technologies. These and other features have made the 2014 Mazda3 a finalist in the Green Car of the Year this year.

The Mazda3 is the carmaker's most popular vehicle globally and Continental Mazda of Naperville, Illinois is a proud member of the Mazda dealership network in the U.S.