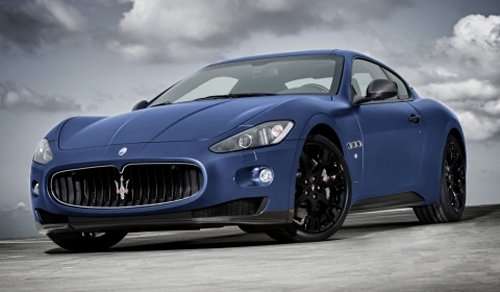 An email to select Maserati customers has tantalized with a reference to a two-seater sports car they will be showcasing at the upcoming Paris Motor Show.
Advertisement

In an email to select customers, Maserati invited them to come to Paris this year for the 2012 Paris Motor Show to see six select models from the Italian carmaker. One of those will be a world premier that "opens up new frontiers in terms of exclusiveness, performance and style."

The debut car will almost certainly be a concept-in-form and probably would not be in production for a couple of years. Still, anything shown by Maserati is sure to be something worth traveling to Paris to see.

The car is likely to be based on the Alfa Romeo 4C and may revive the legendary GranSport name. This would mean a lot of carbon fiber in its body work and a mid-engined, rear-wheel-driven layout. Engines could include the 4.7-liter V8 from the current GranTurismo (pictured) or the new twin-turbo V6 being developed for Ferrari.

That second option is tantalizing, and would make this new vehicle a direct competitor to the Porsche 911 line. Currently, Ferrari plans to put the bi-turbo V6 against a 7-speed dual clutch gearbox - a recent transmission that has really propelled Ferrari into the new century (figuratively and literally).

Whatever they showcase, though, it will be the linchpin of Maserati's plans to boost sales volumes to over 10,000 units. Much of that will ride on the new SUV hitting the streets in 2014 as well. For now, the next-generation Quattroporte sedan will be the company's flagship for 2013.