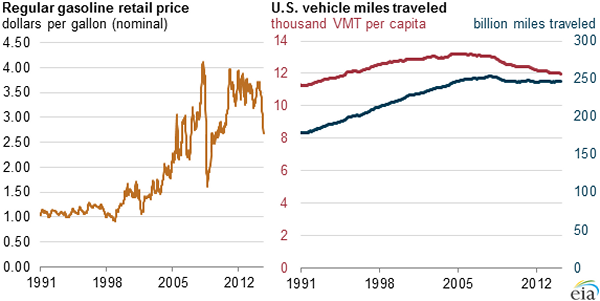 It might seem counter-intuitive, but the EIA says that lower gas prices don't necessarily translate into more demand for fuel. It does make more sense when you consider that, looking at the flip side, higher fuel prices have done little to curb demand for fuels in the past. With gasoline prices dropping to record lows for the second half of this year, however, many may be surprised that this does not mean more fuel is being made as more consumers buy.

Gasoline, points out the EIA, is a relatively inelastic product, with changes in prices having little to do with demand. The chart above shows that retail prices have generally been on an upward trend for the past twenty-five years, yet demand (measured in miles traveled per vehicle) has remained relatively steady by comparison.

By comparison, air travel is very elastic, with increases in fares (often tied to fuel costs) directly correlating to often greater decreases in the amount of air travel people take. This continues over time, as well, showing that the air travel market is far more elastic.

Historically, price elasticity in the gasoline market more closely corresponded to vehicle miles traveled, particularly in the 1990s. As dependence on travel via car increased, however, and other transportation options decreased in value (prices went up), that elasticity began to solidify.

For the longer outlook going forward, the EIA's Short-Term Energy Outlook predicts that gasoline prices will average out to about 23 percent lower overall in 2015 than they were this year.

The EIA report can be found here.