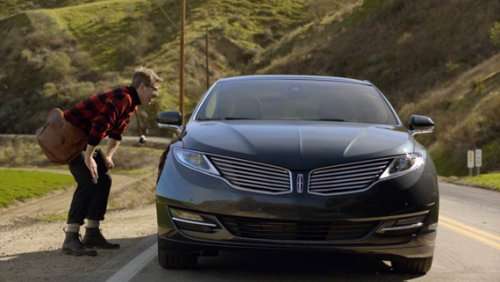 In a first for both the biggest sporting event of the year in the U.S. and for the automotive advertising genre, Lincoln will be showing an advertisement that features a storyline and cameos by Emmitt Smith, Wil Wheaton, and those whose tweets were selected to be part of the commercial.
Advertisement

Ford's luxury brand hired funnyman Jimmy Fallon to come up with a storyline for its Super Bowl ad to be used to promote the 2013 MKZ. Fallon turned to Twitter, asking his fans to tweet responses to his questions about road trips full of unexpected events. Using those, a script for the commercial was penned.

From the most outrageous road trip experiences were chosen from the more than 6,000 responses given, making a 30-second spot that features real life tweeters as co-stars plus cameos from three-time Super Bowl champion Emmitt Smith, hip-hop superstar Rev Run, actor Wil Wheaton, and more. See if you can spot all that star power and creativity in the commercial ("making of" spot shown below).

"A major element of all successful transformations is creating awareness and conversation among many more consumers than just the intended client audience,” said Matt VanDyke, Director, Global Lincoln. “True to our brand’s new vision to be surprising and different, we approached developing this commercial in a new and revolutionary way – we invited the world to help drive this story and now look forward to this work helping continue the conversation about Lincoln.”

Some of the winning tweets included:

@karinarosewhite - We drove passed an alpaca farm, a few of them were meandering on the highway and my sister screamed, "It's the Alpacalypse!" #steerthescript

@debdef - #SteertheScript Picked up a German hitchhiker who came to America to study farming!?! Drove him back to Austin to meet my friends.

@AllenFabijan - #SteertheScript Thousands of turtles crossing the road in FL. Dad stops, so did a huge scary Harley gang! Us and the gang played checkers!

@Will_Stenner – Drove through a movie set in Palemdale, CA didn’t realize it. Got out and enjoyed the catered food #SteertheScript

The full script can be seen at SteerTheScript.com.

In addition to this commercial, Lincoln will be running another, titled Phoenix, to showcase their "rise from the ashes" as the MKZ emerges from the flames of a Lincoln Town Car.