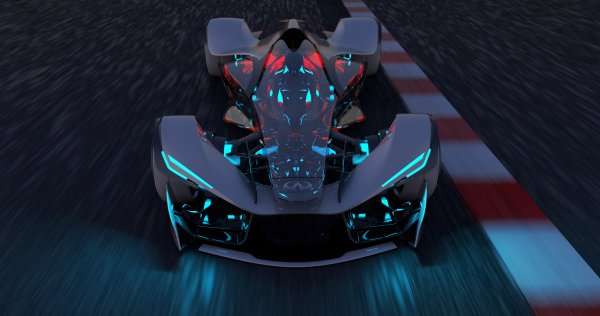 Infiniti SYNAPTIQ Concept is a Future Look at the Brand's Vision

Although it is only a design challenge entry, the Infiniti SYNAPTIQ is a concept that not only visualizes the near-future, but also showcases where Infiniti's designers are headed.
Advertisement

The Infiniti SYNAPTIQ is compelling on many levels. It's a "three-way" car with the ability to swap from a Formula One grand prix racer to a desert buggy and then to a flying machine. This is done by having a common fuselage that is transferred from one vehicle to the next. It's also a study of interior ergonomics and technology interfaces. The design elements are all bent towards a futuristic race that Infiniti envisions as the Air, Rally, Circuit (ARC) triathlon of 2029. The Human Machine Interface (HMI) technologies used by the driver, however, are what show the future direction Infiniti designers are taking with real-world cars.

Before we look at the HMI, let's see what this ARC triathlon is all about. Here's how Infiniti envisions it as an explanation for the car's extraordinary multi-terrain capabilities. "In the year 2029, Infiniti sponsors its own team triathlon called the A.R.C. race. The Air, Rally, Circuit race utilizes a universal fuselage pod that can integrate into three vehicle types. The first stretch of the race is a Formula One grand prix course from LA to Las Vegas. The second portion is a desert race, which requires an off-road buggy to the Grand Canyon. The final third leg of the race is a radical gymkhana style jet race through virtual pylons back to Los Angeles." I doubt anyone would consider that to be anything but cool.

Now for that HMI thing. One of the things that drives automotive technology forward today is how to make the car more relevant in today's highly connected world. Vehicles are being seen by many consumers who're just entering the market as just another technological accessory (another gadget) in their repertoire. It's a tool and the way gadgets are evolving, that tool had better be both connectable and upgradable. The former means it has to be able to interact with not just the Internet but also other devices while the latter means it should either be able to keep up with current trends in tech or be disposable enough to be easily swapped for a newer version. With cars, the second option is not so realistic.

Infiniti designers see this connectivity idea as not just a need to connect the car with devices, but also to connect it to the human driving it. They envision what they call a SYNAPTIZ SUIT (Symbiotic User Interface Technology) worn by the driver to allow him or her to "connect through a spinal lock attachment" to the car. The suit itself is a muscular unit that can hold the driver in position as well as offer tactile feedback and resistance to driver input to simulate physical interaction with the vehicle.

Further, rather than standard windows, the SYNAPTIQ has a virtual rendition of the outside world shown on liquid crystal screens via augmented reality so that overlays and other information can be shown in real-time and in relevant locations. For example, obstacles to be avoided could be encircled in red, vehicle information could be shown around the edges, etc. This is called the Infiniti User Interface (IUI).

The SYNAPTIQ is part of the Los Angeles Auto Show Design Challenge. The vision it gives, especially the IUI and the concept of the SUIT, are interesting. It would not be hard to envision a future car which has seating that acts in a way similar to the SUIT (Ford already has tactile feedback seating) and screens rather than windows to offer an augmented view of the world as you drive. Or race. As the case may be.