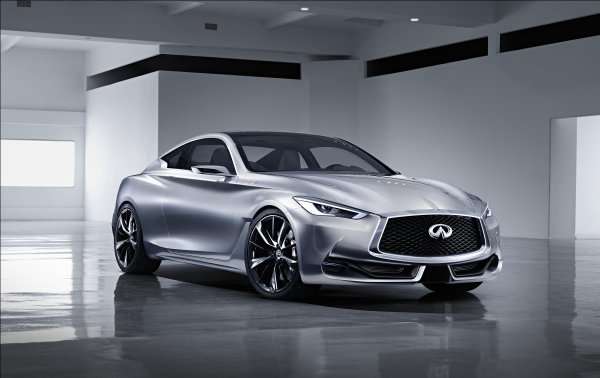 Infiniti has pulled the covers off the Q60 Concept, a design for a future sports coupe, ahead of its ancitipated unveil at the Detroit show next week.
Advertisement

Infiniti has been teasing their Q60 Concept for a few weeks now. The heavily-anticipated sports coupe is said to have been designed from cues taken from the current Infiniti lineup and the race-winning Infiniti Red Bull Formula One racer.

Last month, when Infiniti teased the lines for the Q60, it was shown to be a sleek, fast-paced design. Now the full car has been unveiled in the above photograph ahead of the Infiniti Q60's full debut at the North American International Auto Show in Detroit. Officially, the unveiling of the Q60 will happen Tuesday morning with a sneak peak preview for selected press on Sunday evening. Torque News will, of course, be on-site to get the nitty-gritty on this concept car.

The Infiniti Q60 is a design based largely on the Q80 Inspiration, shown in Paris last year. The Q80 was a larger car, of course, but a similar flowing look and fast-back rear end seem to be key in the Q60 as well.

"The Q80 Inspiration was an indication of Infiniti's future design language," said Alfonso Albaisa, Infiniti Executive Design Director. "The Q60 Concept is the next step in the journey. The sweeping lines of the Q80 Inspiration gave the Q60 Concept its coupe silhouette and looks while the Formula One-inspired touches from the Q50 Eau Rouge endowed the coupe with its sports personality."

The interior uses a variety of leathers, all hand-placed to give support, comfort, and style as designers saw fit. As a 2+2 coupe, the Infiniti Q60 uses sport seating, even in the rear, to create more legroom and higher comfort levels, even during maneuvering.

We'll have more on this beautiful concept next week.