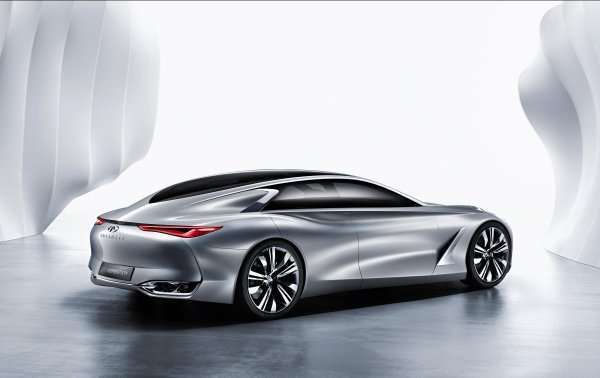 Infiniti will unveil it's new Q80 Inspiration concept at the upcoming Paris Motor Show. Here is a sneak peek.
Advertisement

The top-line, four-seat sedan is designed to shake up the status quo as a "no-compromise ambassador" for driver-centric vehicles with next-generation onboard technologies.

Talk is cheap, of course, but with the Q80 Inspiration, Infiniti appears ready to deliver. On October 2, the new concept unveils in Paris and we'll see whether or not the company is actually going to do what they claim. Given what little we know about the Inspiration so far, however, they aren't likely to disappoint.

The beautiful look of the Q80 Inspiration is our first cue. It's long, sleek, and beautiful. A clear step away from the lovely Eau Rouge concept that captured attention last year, the Q80 is less sedan-like and more speedboat in looks. The Inspiration has a 198.9-inch length with a 122.2-inch total wheelbase. The 22-inch alloy wheels we can see are five-by-two-spoke set in arching wells. The car stands 53.1 inches high and 79.8 inches in width.

The total appearance of the Q80 Inspiration is best described as "sensual."

Adding to the look, Infiniti plans on using an advanced, adaptive suspension on a light, rigid chassis. Light, accoustic glass for the greenhouse and what Infiniti calls "1+1+1+1 seating" for the interior. The powertrain hasn't been announced beyond being "next-generation" and "autonomous," so we can only speculate that it will be electrified (likely a hybrid) with the latest in Nissan's Autonomous Drive tech.

We'll find out more when the Q80 Inspiration unveils in Paris in a few days.