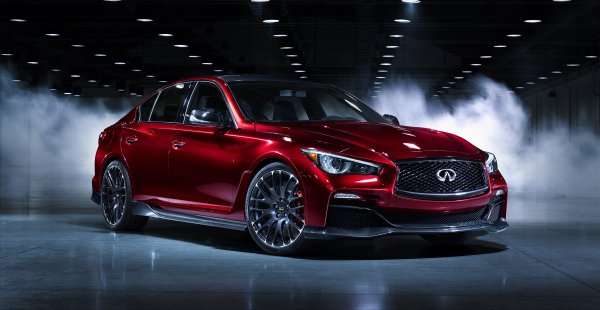 We first introduced the Eau Rouge concept about two weeks ago (see that here) when it was first mentioned by Infiniti before the North American International Auto Show (NAIAS) in Detroit. Now that the Detroit show is underway, Infiniti has unveiled teh car officially with more information and a closer look.

Inspired by the Infiniti Red Bull Racing success in Formula One, the Infiniti Q50 Eau Rouge gives a glimpse at some of the future design elements coming to the revamp for the Q50 sedan - the luxury carmaker's best-selling sport sedan. It's has powerful appeal.

With a lot of F1 included, the Eau Rouge features carbon fiber bodywork, a lower and wider stance than the current-generation Q50, and a much more muscular, powerful appearance. Hinting at possible production, Johan de Nysschen, President of Infiniti Motor Co, said:

"If we built this car I would expect it to feature over 500hp and 600lb/ft of torque. Through our various alliance partners we have access to a range of engines featuring this performance capability which, with a fair amount of engineering effort, can be developed to exhibit Infiniti character and accommodated within the Q50 engine bay. The engine we are evaluating for the Q50 Eau Rouge is a big personality, V-cylinder engine with forced induction. I think our engineers have been waiting for a project like this."

In common with the current Infiniti Q50, the Eau Rouge shares only two things: front doors and roof pillar arches. Otherwise, it is entirely new. Front and rear fenders open up the car's stance by 20mm while the larger deck lid with its deeper spoiler creates more down force. Dark chrome detailing sets off the deep red paint, replacing the brighter chrome on the production Q50. The large 21-inch forged alloy wheels complete the package.

Inside, the Q50 Eau Rouge is all about luxury with a hint of racing heritage. The high-grip sports steering wheel is backed by Formula One-style paddle shifters while the doors and center console see carbon fiber infusions to complement the exterior placement of this lightweight material. The silvered chrome accenting the Q50's interior is replaced with blacked chrome to match the Eau Rouge's exterior.

Will Infiniti build this performance-oriented sedan? They won't say.

"Performance is a key ingredient of Infiniti vehicles such as the Q50 sports sedan. Our involvement in Formula One provides inspiration and excellence to our designers and engineers. Q50 Eau Rouge provides not only a glimpse of the design language, but also the performance capability of a future special series," de Nysschen added.