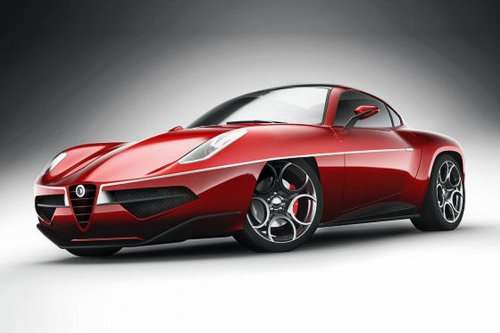 Get your funk on! Alfa Romeo gives early reveal of the Carrozzeria Touring Disco concept

Coach builder Carrozzeria designed this Touring Disco on its 1952 design of the same name while using the underpinnings of the current Alfa Romeo 8C Competizione to make for a sexy hatchback which will see limited production and go to select buyers, who're already lining up for this red beauty.
Advertisement

It's serious beauty and luscious design you'll see in the conceptual releases teasing the car's showcase at the upcoming Geneva Motor Show. Showcasing Alfa Romeo's signature lipstick red coat, the Disco Volante has all the sexiness expected of a design from Carrozzeria. Where the original 1952 design bubbled with form and eye candy, like a red haired Marilyn, this new 2012 design wears pants and exudes beautiful raw power like a fire-topped Hepburn.

Yet the two retain many similarities, keeping it all in the family. This new design incorporates the boattail rear window, though as a hatchback rather than a tube-like fin, and has the same strong hindquarters of its predecessor. Underneath the skin, things change drastically as the older C52 Disco Volante's 1900 engine and transmission are replaced with a more modern 4.7-liter V8 and 6-speed transmission from the 8C Competizione.

The original Disco Volante got its name from its shape. Although Americans think of "disco" with visions of John Travolta in tight bell bottom pants, in Italian the term "disco volante" means "flying saucer" - referring to the 1952 design's UFO-like shape as Alfa Romeo experimented with air flow designs for the race track. This newer 2012 design dispenses with that, of course, but has rounded body panels that flare just enough to hint at the concept of its predecessor.

This hint at its pedigree continues at the rear of the car where the large, rounded fins are replaced by a small, rounded, but clipped rear end with the same tiny tail lamps and twin exhaust ports sandwiched at center. The 1952 also featured one of the first all-aluminum engines in the Alfa Romeo line and this current drive train from the 8C in today's Carrozzeria Touring Disco Volante retains that in the 443 horsepower V8.

Indeed, in both modern function and throwback form, this 60th anniversary concept in the Disco Volante line is definitely one hot number. Carrozzeria says they will be building the car in small numbers as a limited edition, so those who want one will have to act quickly. Price tags haven't been set, but if you can afford to seriously consider buying one of these lipsticked beauties, you probably don't care what it costs anyway.

If you can afford a UFO and have the disco floor to park it on, however, nothing could be hotter than having an Alfa Romeo Carrozzeria Touring Disco Volante. Surely one of the smokinest concepts to reveal this year.

Nicolas Zart wrote on March 3, 2012 - 12:31pm Permalink
I can't believe I didn't pick that one up! Wow, stunning. Have you also seen the TZ3 Zagato project. The Disco Volante was revolutionary in its time but with poor understanding of high speed draft and uplift, the car might have been streamlined, with enough speed, air would go under the nose and pick it up with disastrous results. This is a perfect reiteration of an old concept. I can't wait till the 4C comes out. It's my next gas car.
Aaron Turpen wrote on March 3, 2012 - 2:22pm Permalink
Ya, they changed that with the mountain climbing Spider version a couple of years later (1955 or so I think). The original never went to the track. This new version is nothing short of sexy. The 4C is going to be something like $65,000. Right? I figure when our Honda Civic and/or Mazda5 give out, fuel cells or natural gas options will be plentiful and we'll go with one of those. Believe it or not, as much as I love supercars and awesome auto design, I actually would prefer to spend money collecting tractors over cars. :)
Nicolas Zart wrote on March 3, 2012 - 9:18pm Permalink
Well, since we're telling truth here, I would like to collect miniature trains, mostly Trans Europe Express and I'm crazy about dart frogs! I thought they were aiming the 4c at $40,000, which means 50 to 55,000. Nonetheless, it will be a great competitor to the Boxster.
Aaron Turpen wrote on March 3, 2012 - 9:46pm Permalink
Awesome. I actually ghost wrote a little book on model train design and building. Focused on the trains themselves, rather than the layouts. It was fun. A lot of rock stars are model train enthusiasts, btw. As for the 4C, the last number I saw said $55-65k USD. I always assume the taller number will be it. :)
John Bryans Fontaine wrote on March 3, 2012 - 2:39pm Permalink
Not bad. And the spyder version should be exceptional.
Ilse wrote on August 1, 2018 - 8:59am Permalink
May I simply just say what a relief to discover an individual who actually knows what they are discussing on the web. You certainly understand how to bring a problem to light and make it important. More people really need to check this out and understand this side of the story. I was surprised you are not more popular given that you surely have the gift.
Typicalcat67 wrote on December 26, 2019 - 12:39pm Permalink
Simply desire to say your article is as astounding. The clarity in your post is simply excellent and i could assume you are an expert on this subject. Fine with your permission allow me to grab your feed to keep updated with forthcoming post. Thanks a million and please continue the rewarding work.

Panasonic Updates Profit Forecast, Noting How Much Tesla Batteries Help The Jump
2022 Porsche 911 GT3 Laps Nurburgring in 7:04 With Journalist Behind The Wheel
END_OF_DOCUMENT_TOKEN_TO_BE_REPLACED