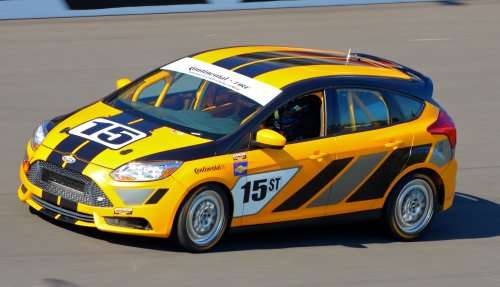 The Ford Racing Focus ST-R will make its competition debut this afternoon at the Grand-Am 200 at Grand-Am Weekend at the Daytona International Speedway. Based on the Focus ST, the ST-R is purpose-built for racing competition and will compete in the Continental Tire Sports Car Challenge ST class.
Advertisement

The ST-R features a 2.0 liter EcoBoost engine, FIA-regulation roll cage, uprated braking, and a track-tuned suspension. The Focus ST-R is Ford's first global vehicle to join the turnkey race car family, which includes the Mustang FR500C, FR500S, Cobra Jet, Boss 302R and 302S. The new ST-R was over a year in development to tune it for Ford Racing turnkey competition use.

“The competition debut of all our FR family of turnkey ready-to-race cars has not been the completion of the journey but the transition to a new phase of the development process,” said Jamie Allison, director, Ford Racing. “Our partnership with Multimatic Motorsports has led to past success with the FR500C and the Boss 302R and their contribution to the product that will take the track at Daytona later this week has been critical.”

The Focus ST-R will compete across several series including Gram-Am ST, World Challenge TC and the Canadian Touring Car Series. Ford also hopes to pit the new racer in European motorsport series like the 24 Hours of Nürburgring.

The new turnkey race car will be available to order from Ford dealers in North America for both amateur and professional drivers. Ford plans to broaden that availability to other markets in Europe and Asia in the future, but has not given a time table for that. The design of the Focus ST-R allows it to be built at any Ford factory which manufactures the world-popular Focus ST with only a few modifications, making it a race car with easy global reach. Customers need only add communications equipment and decals to be ready to race in most FIA-based competitions.

“This is a competitive turnkey race car that will allow our customers to compete successfully in multiple series around the world with minor modifications. And it shows the ongoing alignment of Ford Racing with our Performance Vehicles development group," says Allison.

The 2.0-liter EcoBoost engine in the Focus ST-R gives it 250 horsepower in a compact, lightweight, fuel efficient engine block. Strong torque levels are given in a broad, flat curve at 265 pound feet. The ST-R comes standard with a 6-speed manual transmission specially revised to give faster shifting and maximum punch with each throw. The sixth gear has been tuned to longer runs for higher economy while maintaining speeds.

Ford plans to expand the Focus ST-R concept to other models meant for sports drivers. The racers of this type obviously boost the public relations and recognition of the road models they come from, which has shown positive results for the Fiesta in RallyCross and X Games editions.