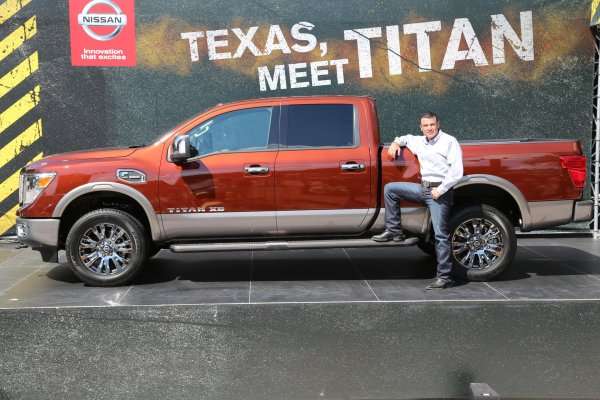 Finally a Sales Date for the 2016 Nissan Titan XD

The Titan XD plowed into Texas for the State Fair and Nissan's Fred Diaz gave it a date for the showroom floor.
Advertisement

For months now, since its debut in Detroit last January, we've heard "it's coming soon" as our only answer when we asked about the new Titan XD "heavy half ton's" sales date. We, like many truck enthusiasts and journalists, are eager to get our hands on the Titan XD. Now, at least, we know when the buying public can expect to see them in dealerships nationally.

The 2016 Nissan Titan XD features a powerful eight-cylinder Cummins diesel engine that displaces five liters and outputs 555 pound-feet of torque. New framing and other upgrades for the Titan XD make it a "heavy half ton" capable of pulling weights far beyond the usual half-ton truck market norms yet retaining most of the efficiency and payload dimensions of a standard half-ton pickup.

"The key attributes of TITAN XD is that it offers increased towing stability, along with more torque, than a traditional half-ton pickup – without the sacrifices of a harsh ride, unnecessary capability and higher price of a ¾-ton truck," said Diaz.

The Titan XD is aimed at a specific, untended buyer in the pickup truck market: those who two significantly with their truck, but do not need the cargo or tongue capacity of a heavy-duty pickup truck. Key users in this market are gooseneck trailer pullers, livestock haulers, and others who pull multi-axle trailers that do not have significant tongue weight, but do carry significant cargo.

An integrated gooseneck is built into the bed and attached to the cross frame as is a load-distributing ball hitch package at the rear bumper. Nissan is one of the only truck manufacturers offering truck capacity load-rated towing kits as standard equipment at the dealer.

Other 2016 Titan models will include a V6-powered gasoline Titan, a first ever for the Nissan full-sized offering, as well as an all-new V8-powered Titan half-ton.