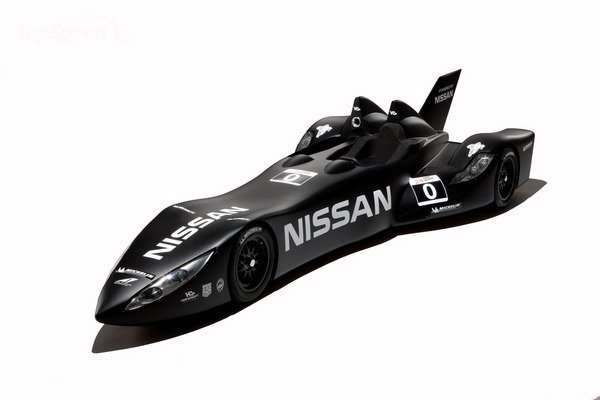 The designer of the DeltaWing sees the BladeGlider and ZEOD RC cars as infringements on his design patent for the DeltaWing, which Nissan is no longer a part of. He has requested a cease-and-desist order from the courts.
Advertisement

Dr. Don Panoz is the man behind the DeltaWing design concept. This concept made a splash in LeMans when it was given approval as a Garage 56 experimental entry into the 2012 series. It did very well for itself and, with the rule changes, was redesigned as the DeltaWing Coupe, now an accepted design for LeMans racing, though Nissan is no longer a part of the project.

Instead, starting in 2014, Nissan will be entering the new ZEOD RC hybrid-electric concept into the Garage 56 category as their vision of the next-generation of DeltaWaing-style racing. Panoz saw that as an infringement on his design, he says, but decided not to pursue it because it was experimental in both design and powertrain and was not likely to go any further than the conceptual stage.

Then Nissan released the BladeGlider concept.

Panoz believes that because the BladeGlider is planned for consumer production, he should step in and enforce his rights. He owns patents on the DeltaWing design and feels that the ZEOD RC and BladeGlider are both infringements on those patents. He's asked a court to issue a cease-and-desist order to Nissan on both vehicle designs, demanding that they stop showing, representing, and otherwise marketing them in all media. This would put a halt to the ZEOD RC's Garage 56 entry and would stop the BladeGlider from being promoted or shown at auto shows and online.

Panoz has named both Darren Cox, Nissan's motorsport boss, and his former colleague on the DeltaWing, now a Nissan employee, Ben Bowlby. Bowlby is one of the principle designers behind the BladeGlider.

All of this is still in its preliminary stages, but it appears that Panoz may have the legal system on his side with this one. It will come down to nitpicking over what the patents cover, which Nissan may have already mapped out with their legal team before introducing either the ZEOD RC or the BladeGlider.

Nissan, for its part, has not issued a statement as of yet. The ZEOD RC is already completing track testing and is said to be ready for the race circuit next year. The BladeGlider, Nissan recently said, is already a reality in prototype form (based on the Ariel Atom), but would probably be two or three years away from production at this point.

This will be interesting to watch as it could put a big crimp in Nissan's marketing.

MotorsMadMan wrote on December 7, 2013 - 5:59pm Permalink
In not sure who TOURQUENEWS is or what your credentials are but I just stumbled on this article looking for some facts on this particular story, you see some of us like to gather facts before we go making comments on issues, especially when someone's reputation might be involved. However what I have found is the most route one lazy arse attempt at publishing a story. You clearly now nothing about this story, Motorsport or journalism. Please take this inaccurate drivel off the internet ASAP.
Aaron Turpen wrote on December 8, 2013 - 12:24am Permalink
When you're done trolling and actually want to read some facts, MotorsMadMan, maybe you will like to see the lawsuit filing itself. A copy of it is here: http://www.scribd.com/doc/188927688/Don-Panoz-lawsuit-against-Nissan Otherwise, kindly point out any actual mistakes you found in the article instead of just driveling on about how inaccurate you claim it to be. Thanks.
James Hazen wrote on December 8, 2013 - 5:15pm Permalink
For one thing, you mention F1 about a dozen times. NONE of the involved parties have anything to do with F1. The Deltawing raced at Le Mans (nothing to do with F1), in the American Le Mans Series, and will race in the TUDOR United Sports Car Championship. The ZEOD RC will race in the World Endurance Championship. Once again, none of these have anything to do with F1. It's ignorance like this that hurts motorsport.
Aaron Turpen wrote on December 9, 2013 - 11:25am Permalink
We're reading the same article. Right? I don't see "F1" anymore. It was a simple oversight which we corrected and extend our apology.
James Hazen wrote on December 9, 2013 - 11:28am Permalink
You corrected it, good job. Though it's a mark of a good journalist to admit the corrections instead of changing the article and then acting like the mistakes were never made in the first place.
Aaron Turpen wrote on December 9, 2013 - 12:51pm Permalink
I mentioned it twice, not "a dozen times." And your comment cam AFTER those changes were made.
MotorsMadMan wrote on December 9, 2013 - 1:51pm Permalink
As pointed out by James, the most glaringly obvious errors where referencing this as an F1 project which I see you have attempted to correct. Although still inaccurate as the race is named after the town in France in which it takes place, which is Le Mans not lemans. It's somewhat disappointing that you have access to the lawsuit document, yet clearly did not read it, as the majority of your errors, could have been corrected by reading it, however as you asked for us to highlight your mistakes. here are some other areas where your article is incorrect. Panoz was not the designer of the DeltaWing, that was Ben Bowlby, Panoz was principally the financial backer for the project after it the initial concept had been rejected as a potential new design for indy car and been granted the Garage 56 entry at Le Mans 2012. Delta Wing was not given entry into the 2012 series, only a Garage 56 invitation to the 24 hours of Le Mans Race Whilst it showed well whilst it was running, and was no doubt a success in terms of marketing and demonstrating the technology, it could hardly be said it did well for itself in that race, as it retired after 75 laps following an accident in which the DeltaWing ran into a concrete barrier at the Porsche Curves after a collision with the Toyota on a restart lap, although it did do better at Petit le Mans. There have been no rule changes for Le Mans (or WEC) which would currently allow the Delta Wing to run competitively. The rules for ALMS (a series founded by Don Panoz) were modified to allow the car to run in the P1 class for the 2013 season. ALMS has ceased to exist and has been merged with Grand-Am to form TUSC, in which Daytona Prototypes, ACO-spec LMP2 cars and the DeltaWing will comprise of the Prototype category, although technical regulation are still up in the air, particularly around how performance balancing will be achieved between each style of design. Therefore I don't see how this is an accepted design for Le Mans racing ? Nissan have not entered the ZEOD RC into a Garage 56 Category, there is no such thing, Garage 56 is an invitational entry into the 24 Hours of Le Mans extended by the ACO, not to compete in the race, but in order to showcase new and innovative technology within the framework of the race. This Law suit is not about patents, no patent information has been submitted as evidence. The suit stands firmly on IPR ownership rights, and transfer of those rights from previous employments, and the standing of employment contracts and implied entitlement on word of mouth agreements. As for mistaking Le Mans for F1 being "a simple oversight" that speaks volumes, It's the equivalent of reporting American football as soccer, or boxing as UFC you might allow it from an 11 year old seeing it for the first time, but someone attempting to depict a serious viewpoint and not knowing the difference is just laughable. PS: I never noticed the apology for reporting this as an F1 story, but apology accepted.