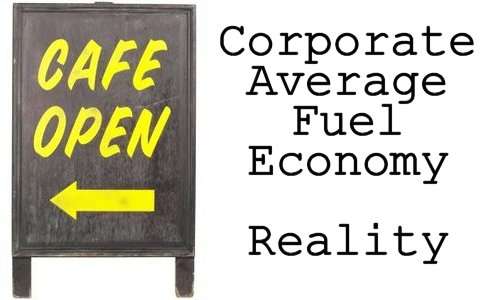 A lot has been said about how great the new efficiency standards set by President Obama are and how much money will be saved and how much fuel won't be used because of them. Rhetoric is one thing, reality is another.
Advertisement

Would it surprise you to know that in 1980 when the average Corporate Average Fuel Economy (CAFE) for cars was about 25 miles per gallon, actual on-road economy was about 16 mpg? Or that in 1990, when the average CAFE for cars was 28 mpg, the actual on-road economy for them was only 20 mpg? Even in 2000, the CAFE average for cars was still around 28 mpg, but on-road economy was just 21 mpg. Those are numbers the Federal Highway Administration (FHWA, on-road data) has as compared to the annual reporting of the National Highway Traffic Safety Administration (NHTSA) for CAFE figures. These numbers are just for passenger cars - they get worse with light trucks.

Would you also be surprised to learn that the current standards promoted by President Obama and recently finalized and released, conveniently, during the Republican National Convention in Florida, are actually numbers first proposed and initiated in policy by former President George W. Bush back in 2007? Yes, an evil, oil baron Republican initiated the first, tougher CAFE requirements in over two decades, not the current guy taking credit for it. That might give some recent commentators pause.

Whether it's a Republican or a Democrat (I prefer the terms "Republicrat and Demopublican" myself) that initiates CAFE, though, the fact remains that what is advertised is not really what is being provided. Of course, false advertising is the standard in Washington.

The 7-9 mile per gallon disparity between the CAFE requirement and the actual on-road efficiency of cars is easily explained once you understand how the Corporate Average Fuel Economy scheme actually works. Once you understand that, you'll see why automakers didn't really argue that hard against these newer requirements. In another segment (find it here), we look even deeper and see why it is that setting up more stringent CAFE requirements doesn't change anything worthwhile (despite the promises), but it costs us plenty when we do it.

How CAFE Is Measured vs EPA Sticker Measurements
Every new car on the lot has a window sticker that those in the business call a Monroney. This is a standardized sticker showing the costs, package inclusions, and so on for the car in question. Part of that sticker is the easily-recognized Environmental Protection Agency (EPA) mandated fuel economy graphic. This shows the city, highway, and average fuel economy numbers in miles per gallon for the vehicle, according to EPA testing.

These numbers are very different from CAFE numbers, which are administered by the NHTSA.

When the NHTSA tests a vehicle for CAFE mpg, it puts it on rollers, gets it up to 55 miles per hour, and then measures its fuel consumption. Nobody is in the car, no changes in highway conditions or speeds are given, and nothing from the real world is affecting the car. The consumption it has under these conditions is its CAFE mpg.

When the EPA tests a vehicle for mpg, it uses a series of tests that include the weight of the driver in the car and that attempt to mimic real-world conditions. Highway speed is measured, then city speeds, and things are thrown in the mix to simulate stop-and-go traffic and the like. From here, the highway mpg and city mpg are calculated. Then the average American's drive is simulated as a 60/40 split between city/highway driving and from that the average of the two is calculated.

First, the 54.5 mpg is actually not in the CAFE requirements at all. It's a projection, not a set standard. More on that in a moment.

The new NHTSA CAFE standards are in two parts, since the EPA's mandate for CAFE only allows them to set rules for five model years at a time and with updates, the agency usually offers five years of requirements followed by an additional five years of expectations. Most of the time, the news media sees this as just ten years of mandates and since big numbers make headlines, they go with the biggest. More often than not, the politicians and back-patters involved will encourage this assumption.

In the current CAFE standard just finalized, model years 2017-2021 are mandated while model years 2022-2025 are proposed (aka "augural" and based on the EPA's "best estimates"). This means that the only thing that matters, really, are the requirements up to 2021 (the government is also required by law to give five years' time before implementation). Actual CAFE requirement for cars in model year 2021 is 40.3 mpg to 41.0 mpg.

So where did this much-touted 54.5 mpg number come from? Well, a second part of the CAFE standard is in regards to CO2 emissions restrictions by the EPA. In the proposed augural projections, CO2 emissions would be restricted to 163 grams per mile. If automakers met that purely by improving fuel efficiency, then they would have to achieve 54.5 mpg.

Let me recap: the current CAFE standard is really 40.3 mpg to 41.0 mpg by 2021 and if the best guess for 2025 is right and if EPA carbon dioxide restrictions are met entirely through fuel economy improvements, then the CAFE in 2025 would probably be 54.5 mpg. Got it?

Of course, in press release and media land, all of those "best guesses" and "ifs" are translated to headlines reading "New stringent 54.5 MPG CAFE requirements will save the world!" This makes Fox News translating Arabic headlines look highly accurate..

Oh Wait, There's More
So far, all of the numbers we've used apply only to cars. They don't include trucks, SUVs, etc. and also don't mention the footprint and sales volume measurements used to customize the CAFE requirement to each manufacturer.

Ever wonder how, if CAFE required Ford, General Motors, and Chrysler to make more fuel efficient vehicles, the number one selling Ford could be a low-MPG pickup truck and the hottest selling Chevy could be an SUV or how the most in-demand Chrysler product in the U.S. could be a full sized pickup?

Ya, it's because of those pesky footprint and sales volume metrics. Standards for vehicles with larger footprints (e.g. trucks) are very different from standards for cars. In this new set of rules, that "car vs. truck" split is expanded by "footprint" measurements which create several different classes of vehicle for CAFE measurements. Further, the manufacturer is not compelled to build any one type of car and measurements (and requirements) are separated by those footprints, so if Ford keeps building pickups, then most of their "footprint" will be in trucks and thus much lower in MPG requirements than would, be, say, Hyundai who mostly makes small cars and thus has a much higher MPG number to meet. And if people keep buying SUVs instead of Prius and Volts, then Toyota and GM will have no reason to keep building those cars unless they want to cash in on some of the exceptions to the rules given to specific alt-fuel vehicles.

Which creates a whole new class of work arounds for automakers. Special "compliance incentives" like credits, air conditioning improvements, incentives for building technology-specific alternative vehicles (plug-ins, fuel cells, and natural gas), etc. As before, the loopholes and opportunities to game the system are rampant.

Now you know why there wasn't a lot of fuss from Detroit over these new CAFE requirements. In our next segment, we look at why CAFE doesn't actually work at all and give new historical figures showing why that is and how it actually raises oil consumption, costs, and worse.