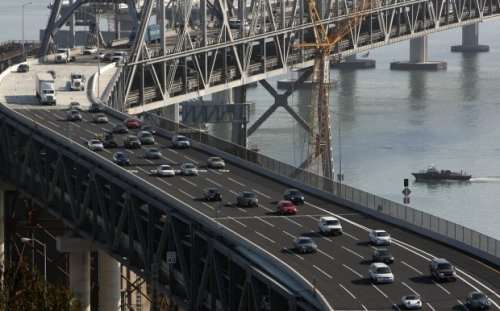 California lawmakers are proposing yet another tax on California residents. This one would tax you for driving by adding a Big Brother device to your car.
Advertisement

California is either at the forefront of automotive legislation or is continually getting in the way of automotive progress, depending on your perspective. There's no doubt that the things the Golden State creates to legislate vehicles seem to trickle down to the rest of the country, proving Ronald Reagan's theory.

This time, the Metropolitan Transportation Commission (MTC) of San Francisco has a new idea: put a GPS unit in people's cars and track the miles they travel, sending them a tax bill for each of those miles. Of course, exemptions would include low-income people, government workers driving government vehicles (on or off duty), and (most likely) lawmakers themselves, since we all know that laws are made by those who have little intention of following them.

A spokesman for the MTC says that this new vehicle miles traveled (VMT) tax would cut down on pollution and traffic congestion while raising funds for things like road construction and surface repair. You know, like the gas tax is supposed to be doing, but isn't.

For some people, the answer to everything is more taxes. This seems to be especially true in California. Of course, little mention from the MTC about the VMT regarding how much it would cost to implement such a tax, including installing all of those GPS units and the infrastructure required to track them. Not to mention the lucrative new underground economy of stolen and hacked GPS units that would inevitably pop up. Or the new industry of registering cars outside of the affected tax area - or registering them under exempted people's names in order to avoid the tax. Not that I'm trying to give anyone any ideas or anything, but these are the sorts of things people do when confronted with unpopular taxes and fees. One needs only look at how medical marijuana has fared in Cali to see how this would pan out.

Of course, this bold new plan has two benefits. First, it circumvents a gas tax, which is extremely unpopular amongst the people who do things like vote for these lawmakers proposing this new plan. Second, it would tax those who purchase alternative fuel vehicles like electrics and hybrids, and thus use less fuel. This is not new, Washington and Arizona have both considered taxes on alt-fuel cars as well. Interesting, since all three of these states looking to raise taxes are currently giving tax breaks for purchasing those more efficient vehicles.. Ya, politics rarely makes sense.

The California VMT proposal and "study" to accompany it are being considered by the Association of Bay Area Governments this week. People who live in the Bay Area are likely watching this one closely. Those of us who like watching California for its immense entertainment value will be keeping tabs as well.