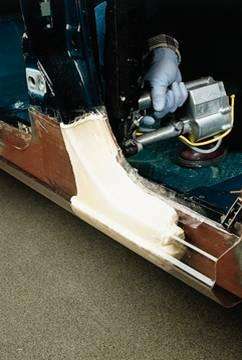 Betafoam Renue is a green weight loss wonder for cars

One of the greatest advancements in automotive technology has been dieting. Most vehicles weigh less now than they did in the 1960s and the trimming continues. Now Dow Chemical offers a green, renewable way to avoid fad dieting and seriously combat the pounds while reducing noise and vibration.
Advertisement

Back in May, Dow Chemicals introduced a chemical foam solution made with 25 percent renewable materials. The foam, based largely on soybean oil, is made to replace the Betafoam system used in many vehicles on the road now. The new foam, called Betafoam Renue, is 25% less dense than Betafoam 2.0, which is currently being used in about 30 car models being sold in the United States.

Dow has now released Renue to the market, making it available to manufacturers who want to increase their green use of materials and reduce environmental impacts. The current Betafoam product is already a low-emissions MDI, using ingredients common to today's polyurethane manufacturing. Renue retains that low-emissions standard, but takes it further by heavily reducing petroleum use in the product by replacing it with renewable soybean oil.

Both foams are biodegradable, of course, and are meant to fill vehicle cavities to reduce noise and vibration without adding a lot of weight. The challenge with bringing Betafoam Renue to the market, says Dow, was engineering it to operate within the same parameters as the existing common foams on the market. Renue uses the same temperature, spray rate, and delivery process as its Betafoam 2.0 counterpart, so manufacturers do not have to retool to begin using it.

In a side-by-side analysis of 25 production vehicles using standard foams versus Dow's new option, Allan James of Dow Automotive Systems showed that Betafoam has fewer leaks, lighter weight and a potential mass savings of up to 30% per cavity. The presentation at the Applied Market Information Bioplastics Compounding and Processing 2012 Conference was the culmination of trials conducted since October of 2011.

The Betafoam 2.0 products have been in use in production models such as the new Dodge Charger, the Cadillac CTS, the BMW X3, and the Lamborghini Gallardo and the new Renue product is being tested in vehicles from those manufacturers as well as others. Dow hopes to largely replace the Betafoam 2.0 use with the Renue product.

Finally, since Renue is made from soybean oil, not protein, it is not displacing food products. Soybean oil is largely an industrial byproduct created after soybeans are crushed for use in processed foods and animal feeds.