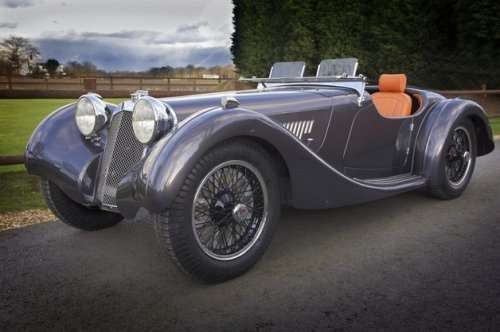 After 75 years, Atalanta Motors returns with a new roadster

British automaker of yore, Atalanta, is returning after 75 years of dormancy with a beautiful remake of a classic, small production, innovative roadster, the Sports Tourer.
Advertisement

Back in 1937, Atalanta Motors introduced its first car and became the first pre-war British automaker to innovate with features like fully independent rear coil ring suspension, full hydraulic sixteen inch brakes, an electrically operated magnetic epicyclic gearbox, and a lot of other things that, at the time, were some of the greatest engineering innovations ever made. When war broke out, the company stopped production and never came back. Then, last year, they announced a comeback.

Earlier this month, the two principles behind the revival, Martyn Corfield and Trevor Farrington, unveiled the company's new car. The day was March 5 - 75 years to the day from when the Atalanta Sports Tourer was first introduced in 1937, and the location was the prestigious Royal Automotive Club, the same location where the original 1937 Atalanta was launched. The car? A remake of that same Sports Tourer using modern refinements on the original designs.

The classic lines and beautiful looks of the original topless beauty are retained, right down to the spoked wheels and leather seating. Underneath, however, much has changed. How much? Hard to tell since the principles behind this revival have not released any new information. "Our 2012 Atalanta 'Revival' car embraces the elegance and style of the 1930's original and where appropriate employes the use of modern materials and technology.." says the company's website. That is, literally, all of the information available on the car outside of its physical unveil early this month.

What we do know is that only 7 of the original Atalanta Sports Tourer cars are still around and of those, only 4 are in working order. The owners of all four of those were on hand at the unveil, as was the son of Neil Watson, one of the founders of Atalanta Motors in the 1930s. All were enthusiastic about the return of the beautiful, but short-lived Sports Tourer.

The company is taking limited commissions for the revival car, each to be custom-built for the new owner with unspecified options tailored to the buyer.

LG's New EV Battery Plant Is a Welcome News for Tesla
Tesla Giga Berlin's New Hurdle: It's Not Only the Gov't, but Now Tesla Itself
END_OF_DOCUMENT_TOKEN_TO_BE_REPLACED