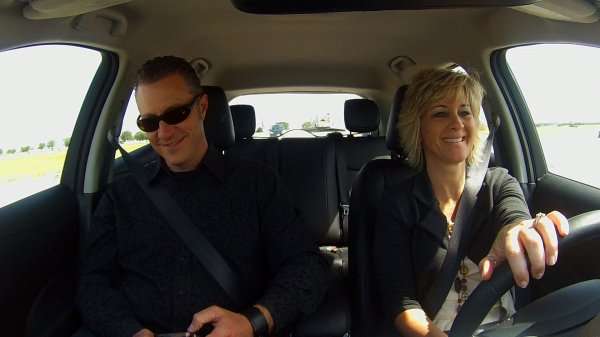 A Texas family has purchased LEAF number 50,000 to be sold in the United States. Learn about the aptly-named Bolt family and their reasons for purchasing the electric car.
Advertisement

Dallas, Texas residents Todd and Lisa Bolt (above) purchased their Nissan LEAF at AutoNation Nissan of Lewsiville, Texas. Little did they or the dealership know that this would be the 50,000th Nissan LEAF to be sold in the United States.

It turns out, in their circle of friends, the Bolts are late-comers to the electric vehicle game. Todd is a pastor at Gateway Church in Southlake and the couple both work there. There are more than 20 employees and members at the church who drive Nissan LEAF cars, referring to themselves as the Blessed LEAFs Club. Todd and Lisa are the latest inductees into that club,

The Bolts and the other members of the Blessed LEAFs Club join the thousands in Texas who have purchased a Nissan LEAF since it was introduced two years ago. In the past year, the Dallast-Fort Worth metroplex has seen about fifty percent higher sales for the LEAF and Nissan expects sales to grow throughout the state of Texas thanks to a new $2,500 tax rebate about to go into effect in the state.

"Beyond the simple economics of not buying gas, we've been impressed with how well the LEAF drives," said Todd Bolt. "When we show the LEAF off to family and friends, they're surprised that the car is so quiet and rides so well. The LEAF does everything we need day-to-day, and given the financial savings, I don't know why we'd buy another gas car."

Dallas-Fort Worth and Houston are among 10 launch markets for "No Charge to Charge," a new promotion that provides two years of no-cost public charging to new LEAF buyers who took delivery of their car after April 1, 2014. The national promotion is modeled after a successful pilot program launched in Dallas and Houston last fall with Houston-based NRG eVgo.