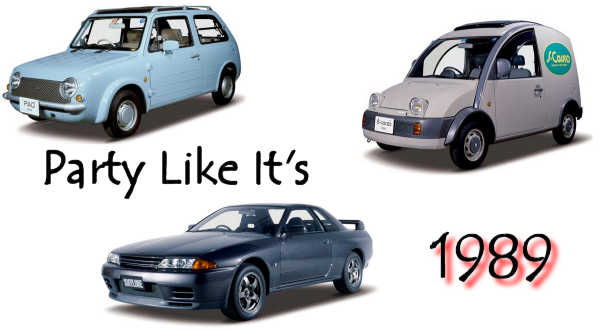 3 Awesome Nissan cars from 1989 you can now import

Twenty-five years ago, these three awesome Nissans were forbidden fruit to the American public. Now, with the milestone of "import collectible" passed, they can be imported freely. We'll save the best for last.
Advertisement

After twenty-five years, three great Nissan cars are now "collectible" and can be imported without extensive modification to comply with smog and safety requirements. Let's look at these newly import-eligible cars and why collectors want them.

1989 Nissan Pao
Pictured top-left, these little two-door "wagons" were very popular in Japan, with the 1989 year seeing all 51,657 models produced being sold out within months. They have a very unique, retro-cartoon look that makes them a popular contender to some Italian models like the Citroen 2CV and Fiat 500 for their look. These have been popular imports to Canada and Mexico already.

1989 Nissan S-Cargo
The lameness of this van's punned title doesn't carry over to its look. With more of that cartoonish appeal, the S-Cargo is a "vanlet" based on the Pao's general design. These attention-grabbing vans were marginally successful in Japan, but have seen a lot of interest from foreign markets where small businesses looking for unique charm have snapped them up quickly. Expect to see a few of these with body wraps plying city streets here in the States before long.

1989 Nissan R32 Skyline
Probably the most popular tuner car of all time, at least in Asian markets, has been the 1989 R32 Skyline, one of the first of the GT-R series and what many believe was the first real competition for the Porsche 959.

Sold mostly in Australia and Japan, these cars were real top-line, Nipponese racers and were the forerunners to today's GT-R. In early January, literally hundreds of these cars were shipped to or began crossing the border into the U.S. as eager collectors awaited them. For the past year or so, the exchange market for these to export to the U.S. was busy in both Australia and Japan as collectors there cashed in on the newfound interest from American fans.

And it's no wonder. These Skylines featured a stock 276 horsepower that was tune-ready for far higher output (some getting as high as 450). The twin-turbo, inline six is wide open for tuning opportunities. The chassis and frame are also legendary for their performance.