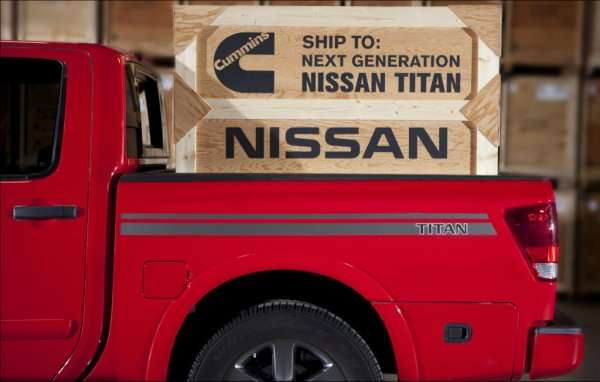 2016 Nissan Titan gets an unveil date

Nissan has told TorqueNews directly that they'll be unveiling the all-new 2016 Titan, and when. We've been anticipating this one for a while and from what we've learned now, it will be more than expected.
Advertisement

We have been anticipating the new Titan pickup truck for quite a while. With the release and buzz surrounding the introduction of a huge V8 Cummins diesel in the Titan last year, we got pretty excited and hoped to see a new Titan design at this year's auto shows. When that didn't happen, I cornered Nissan at the Denver Auto Show, which happens right before the New York Auto Show (which starts next week). My assumption was that they would unveil a new Titan in the Big Apple, but that turned out to be wrong.

After ogling the new Nissan GT-R NISMO and the new Juke NISMO RS at the Nissan booth during press days, I talked with some good friends at Nissan and began grilling them on the Titan. We learned not only the expected unveil date for the new design, but also a few tidbits about what it will look like when the cover comes off.

We were puzzled last year at the huge 550 lb-ft diesel Nissan announced they would be putting in this truck for the next model design, but the reasoning was cleared up in our one-on-one talk with Nissan about it. This time, we were wondering why there hadn't been a fast follow-up announcement from that to announce the new Titan. Rumor has been that it's because Nissan isn't prioritizing the Titan and is instead focusing on the Frontier, marketing-wise, and has sort of left the Titan out in the pasture as the company focuses on its fast-paced model introductions for its staple cars and crossovers.

This has borne out, with unconfirmed nods of agreement from Nissan representatives when the point about a lack of marketing for the Titan is made. That's about to change.

The new 2016 Nissan Titan will be unveiled at the North American International Auto Show (NAIAS). Along with that, will be some changes for the full-sized Nissan truck.

The Titan will see a much broader range of model packaging options to include more base-level packaging for work truck buyers and contractors, as well as specific packaging for the diesel option with the Cummins engine that are meant to appeal to the expected buyer for that option.

So we can expect to see the 2016 Nissan Titan unveiled in January in Detroit. Given the shakeup and unusually fast-paced changes happening in the full-sized pickup truck market recently, this is welcome news from Nissan.