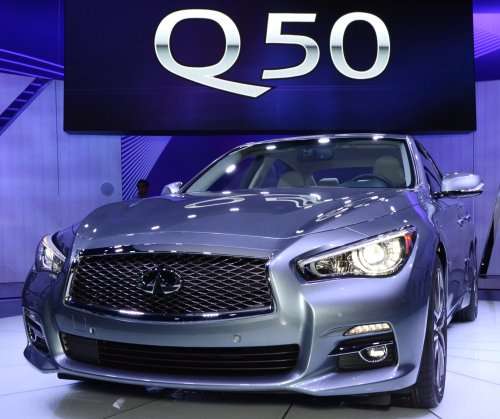 Infiniti unveiled its new flagship luxury sports sedan at the 2013 Detroit Auto Show to an excited audience, promising both a performance and hybrid version.
Advertisement

A much-anticipated unveil at NAIAS this morning came from Infiniti, which showcased its all-new 2014 Infiniti Q50 luxury sports sedan, the flagship of the luxury brand's line.

Presented by Infiniti Motor President Johan de Nysschen and Senior Vice President and Chief Creative Officer Shiro Nakarmura, the Q50 was showcased to an appreciative audience. The Q50 features a new, more dramatic style and will have both a sporty gasoline powertrain and an environmentally-conscious hybrid option.

The new look is very tight, with a somewhat athletic appeal and a low, wide stance. This width allows for a huge amount of interior space for the car's class. That, of course, is augmented by the proliferation of luxury features inside the vehicle, including Infiniti's new InTouch communications system and large, dual touch screens.

For the driver, two new production performance technologies make their world debuts in the 2014 Q50: Infiniti Direct Adaptive Steering and Active Lane Control. The steering system gives advanced control over tire angles from steering inputs, giving a faster-than-mechanical response for the driver while allowing drive-selectable steering options to customize the drive. Active Lane Control is a new camera-based lane marker detection system that augments other active safety systems in the car, helping keep the driver alert and at the center of the lane.

Under the hood, the 2014 Infiniti Q50 will feature both a gasoline V6 and an optional hybrid powertrain. The 328-horsepower 3.7-liter V6 gives more than enough get up and go for the driver who prefers both quiet, sedate cruising or powerful, seat-pressing performance. The Q50 Hybrid will use Infinit's Direct REsponse Hybrid System with Intelligent Dual Clutch Control for both hybrid engine augmentation and low-speed electric-only operation. Both powertrains will be offered with rear-wheel or all-wheel drive.

Infiniti promises more details on the new Q50 before its release to dealerships later this year.