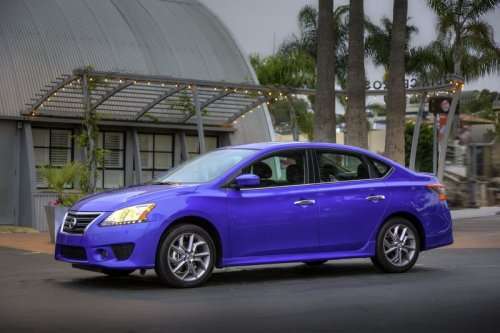 The new 2013 Nissan Sentra has a new engine and next-generation CVT offering higher efficiency and better MPG, yet the car is larger than ever.
Advertisement

Nissan has completely re-designed the popular Sentra for 2013, highlighted recently by our own John Goreham. Underneath the great new exterior styling, though, are some serious engineering upgrades to boost the car's efficiency and power.

The 2013 Sentra is 150 pounds lighter, losing about 5% of its body weight, when compared to the 2012 model. This comes despite larger dimensions and more interior room. Aerodynamic improvements also mean the new Sentra has better slippage through the air. It's new drag coefficient is a measly 0.29, dropping a full five points from the outgoing 2012 Sentra at 0.34.

To go with those changes, Nissan also re-thought the entire power train. An all-new engine has been created for the Sentra, this one smaller and lighter than its predecessor without losing power output or performance. To go with the new engine, a new continuously variable transmission (CVT) was designed to match.

The 1.8-liter engine is an advanced dual overhead cam (DOHC) 4-cylinder whose stroke has been lengthened to improve burn rates. Coupled with the twin Continuously Variable Timing Control (CVTC) system to modulate intake and exhaust timing, the engine is much more efficient than its predecessor. Much of this technology was introduced on the larger engine in the Maxima last year.

To go with the engine stroke and timing, a diamond-like carbon (DLC) coating was added to internal parts to reduce friction and further increase efficiency. Valve springs are now beehive-shaped rather than cylindrical, reducing their inertia weight and smoothing engine operation. The tiny 1.8L still manages an impressive 130 horsepower and 128 lb-ft of torque.

Add in electric-assist power steering, an improved suspension system, and a few other vehicle down-weighting measures and the 2013 Sentra becomes a best-in-class at 34 mpg combined fuel economy.