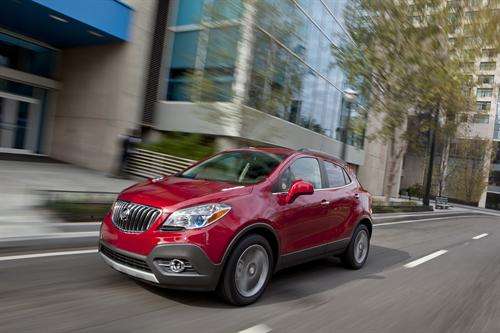 The 2013 Encore joins other Buicks in receiving perfect scores from both crash testing agencies, keeping Buick in the top handful of automakers to achieve perfect scores across its model lineup.
Advertisement

Together, these scores mean that the little Encore SUV joins the rest of the Buick lineup in achieving perfect scores on both IIHS and NHTSA crash tests. Only a few automakers in the U.S. can brag that they've done the same.

The IIHS tests include the front, side, and rollover crash safety for vehicle occupants, including specific tests for head restraints and neck protection in rear impact crashes. A vehicle must receive a "good" rating on all four tests ("good" being the highest possible mark) to receive a 5-star designation. The IIHS is a testing facility paid for by auto insurers nationwide.

The NHTSA is a government program with less stringent requirements, testing front, side and rollover impacts as well as a side pole impact test that simulates a pole or tree at 20 mph. A vehicle is rated with up to five stars for each test and the average of those ratings is the overall score.

The diminutive 2013 Encore has ten standard airbags on board. In a rollover crash, sensors deploy standard head curtain airbags to protect occupants from roof "divots" from impacts with small objects that can dent the roof slightly. This is not a required feature and is usually optional on most crossovers and sport utilities.

“Safety is a top priority in Buick’s product renaissance, as evidenced by receiving these latest safety accolades for Encore,” said Gay Kent, GM executive director of Vehicle Safety. “Our customers can have confidence in the safety performance of every Buick for sale today.”