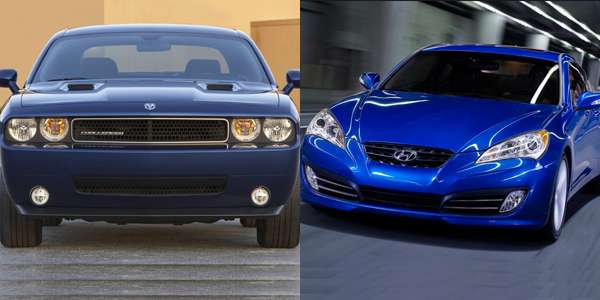 Would You Swap a Dodge Challenger for a Hyundai Genesis Coupe?

This question was posted on a Hyundai Genesis Coupe Facebook page: "Would you accept a 2010 Dodge Challenger in exchange for a 2010 Hyundai Genesis coupe?" The question prompted a lot of internal debate on the page and provoked some research to see if the trade might make sense.
Advertisement

Here's the exact question posted. Because it's a closed Facebook page, I'm not going to share his identity but I will present the entire text of his post as written: "ssome guy is willing to trade his 2010 challenger for my 2010 genesis coupe.. hmmm.. what are your thoughts? both cars are stock, other than some exterior body mods.. my car is slightly faster too but not by alot. i have 55k on my genny and he has 67k on his. opinions????!!"

Based on his posting – and from what others said – it would appear because his Genesis Coupe is faster he's driving the 3.8-liter V6. The Dodge Challenger would also appear to be a V6, too. A side-by-side comparison explains why this isn't necessarily an easy question (unless you're a Hyundai Genesis coupe fan).

There also has to be some consideration for weight to power ratio, too. The Dodge Challenger's curb weight is 3720 lbs. The Genesis is slimmer at 3389 lbs. Again, the edge goes to the Hyundai Genesis.

Edmunds.com gives the Hyundai Genesis a 0-60 time of 6.4 seconds. The Dodge Challenger's time was 8.0 seconds, according to Edmunds. C'mon, the Genesis blows the Challenger out of the water in this comparison.

Let's us turn to Edmunds for a value comparison. As cited above, the Challenger has 67,000 miles on it. I'm going to assume both have some modifications on them and will put them in clean condition for the sake of comparison with 18-inch wheels. The Dodge Charger has a private party value of $14,991. The Hyundai Genesis Coupe has a private party value of $15,069. At less than $100 difference I'm going to call that one a tie.

But the Hyundai Genesis does get the edge somewhat because it would still be under warranty. If problems arise with items covered under the 10-year, 100,000 mile warranty (and even for a short while the 5-year, 60,000-mile powertrain warranty), the Hyundai is covered while the Challenger is long past its protection period.

We're going to have to agree with what this one poster said on the Genesis Coupe FB page: "A v6 Challenger isn't better than anything. Mediocre performance, mediocre build quality, uninspiring body language. It's like any pony car, they lose all the muscle and the majority of their sportiness once you step down from the premium trim levels, and whatever money you sink into them to get it back is better spent elsewhere."

We also like this humorous take on the issue from another poster. "That's how it starts ... First a challenger... Then a yellow vette... Before you know it you wake up alone rummaging through rogaine and Viagra bottles to check your phone that reads 0 missed calls."

What do you think? Would you make a straight-up trade for a 2010 Dodge Challenger if you drove a 2010 Hyundai Genesis 3.8-liter V6? Share your comments below.

Tim McKenzie wrote on December 23, 2013 - 7:58am Permalink
I'd never trade a Challenger (or any muscle car for a Hyundai). I have a 14 SRT Challenger. Build quality is very good (they fixed many early issues...and made improvements throughout the car). He should sell his Challenger and get an SRT Challenger, 5.0 Mustang or SS Camaro.
Brett DeCesari wrote on December 23, 2013 - 2:08pm Permalink
I have a 2010 Challenger bought new and I would'nt even consider trading for a hyundai.I did my research and bought what I wanted.The Challenger has plenty of room inside and the entire vehicle feels solid.You shut the trunk and you feel like your closing a vault.Like the old days.Speaking of the trunk you could fit a Hyundai in there.
Keith Griffin wrote on December 23, 2013 - 3:14pm Permalink
I just had to look up the trunk numbers based on your suggestion. Dodge Challenger has 16.2 cubic feet of cargo space. The Genesis has 10 cubic feet of cargo space. So, that's one plus for the Challenger.
joseph white wrote on December 23, 2013 - 2:47pm Permalink
The Hyundai Genesis can't really be compared to a muscle car. Especially a v6 model challenger. Of course I'd keep the Genesis. I love dodge and am a serious car modding enthusiast. I grew up around muscle but fell into the world of tuners. There are so many more aftermarket options for the KDM lover along with a sportier look and feel behind the wheel of the Genesis Coupes! I personally drive the a 2011 Genesis Coupe 2.0T with moderate modifications done. Plus Hyundai earns anyones respect with America's best warranty offered and some of the highest customer service ratings. For me it's a no brainer! The look, power, feel, and warranty all beat out the challenger!
Patrick Rall wrote on December 23, 2013 - 3:24pm Permalink
I dont think that it is fair to base Hyundai's premium drivetrain against Dodge's base model Challenger. That guy would have to be foolish to trade the Genesis Coupe for the base Challenger unless he doesnt care about performance.
Robbie wrote on December 23, 2013 - 4:36pm Permalink
Everybody thinks there muscle cars are so big and bad. FYI your srt isn't that fast I've walked multiple srt8's in my bolt on and tuned 13 genesis coupe. Oh and by the way mine is the 2.0T. I can tell you this car suprises a lot if people, and hurts a lot of feelings at the same time, there have been quite a few people pissed about losing to somebody with 4.4 less liters then them.
Keith Griffin wrote on December 23, 2013 - 5:02pm Permalink
Amen - like the old saying goes, it ain't the meat, it's the motion. More than a few races have been won by the supposedly less powerful car.
Patrick Rall wrote on December 23, 2013 - 7:21pm Permalink
So your car runs deep 12s? That's mighty impressive.
Tim McKenzie wrote on December 24, 2013 - 11:51pm Permalink
Yes it does. I plan on adding supercharger (modest 8 psi boost). Should get me into the 11's.
Tim wrote on December 24, 2013 - 12:23pm Permalink
My intention was not to belittle the Genesis Coupe. It is the only foreign car that directly competes with American Muscle. The Mustang is becoming a "world car," and will be an even bigger competitor with the Genesis Coupe. I guess I did not like the comparison of a base model against a non base model competitor. WRT to the V6's, the 2011 and newer V6 muscle cars from all 3 companies have 300 plus HP motors and are decent performers. Especially the V6 Mustang because it is so light. @Patrick. Yes, if I hook right, I can get into the 12's. I have raced some V6 Genesis Coupes...and if "modded," they can be very quick. As for the 2.0Turbo....they better be running "obscene levels of boost" if they want to keep up. Anyway, I've lost to highly "modded" cars and even pickup trucks. Any car can be fast, just depends on how much you want to spend. In closing, I also like imports. My last 3 cars were a Volvo C70, Mini S and "modded" VW GTI. I like V8 muscle cars because of the torque the lay down. Torque is what you feel when you drive (that slam you in the seat feeling).
Zachary Claus wrote on May 18, 2016 - 5:36pm Permalink
Not sure where you are coming from when you say the Hyundai Genesis Coupe has more torque and horsepower than the Dodge Charger... I read the title of the article and thought you were specifically going to compare the Dodge Challenger to the Genesis Coupe. The Charger and Challenger are two completely different cars.