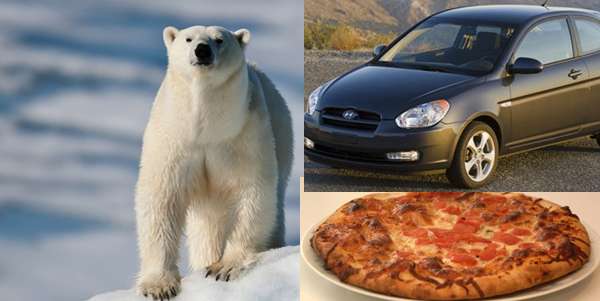 Would You Buy a Hyundai Accent for Cold Weather Pizza Delivery?

What do these three things have in common: Hyundai, polar bears and pizza? They all interact regularly in Barrow, Alaska where a resilient pizzeria owner uses a Hyundai Accent as his cold weather delivery vehicle.
Advertisement

According to a Wall Street Journal article with the catchy headline The Car of the World's Coldest Pizza Man, Aleksandar Joksic, 25, co-owner of East Coast Pizzeria in Barrow, Alaska, bought his 2009 Hyundai Accent because it's fuel efficient and that's important in a place where gas costs $6 a gallon.

But, and this is the interesting part, there are some real challenges to being a pizza delivery guy in Barrow, which is the northern most town in the United States. It's so far north that it sits above the Artic Circle.

Joksic told the Wall Street Journal, "Four months ago, we bought a used Hyundai Accent for deliveries. Gas costs over $6 a gallon in Barrow, and the Hyundai is very economical. Every morning first thing I start the car (it takes an hour to get up to temperature) and unplug it (electricity keeps the engine and fluids from freezing at night). If I turn it off for 10 minutes, it would freeze and die, so I don't turn it off until the end of the day."

Here are some facts about Barrow, courtesy of Wilderness.org:

Here are some facts about the 2009 Hyundai Accent:

So, would you buy a Hyundai Accent as a cold-weather vehicle? Joksic said its combination of front-wheel drive and manual transmission get him around just fine in winter. But he did have this to say: Almost every day in winter, I get stuck somewhere. I'm young; it's an adventure.

Patrick Rall wrote on March 13, 2014 - 7:18pm Permalink
If I lived somewhere with lots of snow, I would look for an older Jeep.