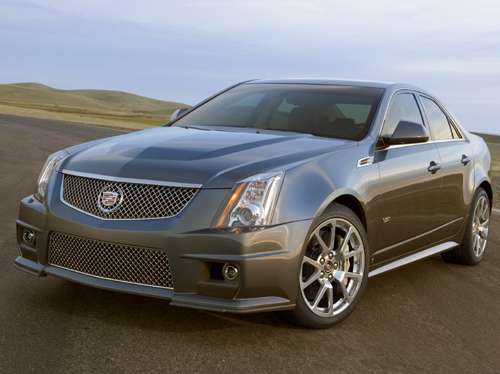 The 2012 Cadillac CTS-V sedan is shining proof that American carmakers have no problems making luxury, high-performance four-door cruisers that compete on level footing with foreign OEMs and beat them by thousands of dollars in price.
Advertisement

It's difficult to think where to begin when praising the virtues of the CTS-V sedan but lets look at the power numbers just because they are so enthralling: 556 horsepower and 551 lb. ft. of torque from a 6.2-liter, supercharged V8. That's just motoring insanity (in the most positive sense of the word).

Also when it comes to performance, I'm going to share this bit of info from Cadillac, who can rightfully toot its own horn in this instance: the CTS-V sedan was the first production four-door on street tires to break the legendary eight-minute barrier at Germany’s famed Nürburgring. That's the track where manufacturers from all over the world go to see what their products can do. (Interestingly, it's also a track that's open to the public to drive.) Best I can tell from some rudimentary research but it may be the only (not just the first) four-door sedan to nip the 8-minute mark.

Performance engines are not my strong point when it comes to describing how they work, which is why I yield the floor for Cadillac to describe this masterpiece. The engine features an intercooled Eaton Twin Vortices Series supercharger, which employs twin four-lobe rotors that are twisted 160 degrees. Typical superchargers feature three lobes twisted 60 degrees. The fourth lobe and greater helix profile, when combined with unique air inlet and outlet ports, create smoother, more efficient airflow into the engine. In addition to improved overall efficiency, this supercharger has superior noise and vibration characteristics compared to more ordinary designs.

OK, when Cadillac uses the word "efficiency" in the last paragraph, it has to do with performance efficiency and not fuel efficiency because the Cadillac CTS-V laughs at fuel efficiency. It gets 12-mpg city and 18-mpg highway with a combined fuel economy of 14 mpg and a gas guzzler tax of $2600 that adds 4 percent to the $63,215 bottom line.

Well, that would be the bottom line of the entry-level 2012 Cadillac CTS-V, but GM loaned me an upgraded model for a week of testing (a week that literally flew by) for this TorqueNews review. The model tested had Recaro high performance seats that were heated and cooled ($3400); a special paint process called Thunder Gray Chromaflair ($995); 19-inch polished aluminum wheels because the 19-inch painted aluminum just won't do ($800); midnight sapele wood trim package ($600) and sueded steering wheel and shifter ($300). Bottom line on all of this enjoyment with $875 destination charge: $72,785.

But it's a steal. The 2013 BMW M5 hasn't released pricing yet but the 2010 model, including a $3000 gas guzzler tax, cost $90,000 before options were included – so that's about $26,000 above the M5, which has similar horsepower and torque numbers. The Mercedes-Benz E63 AMG costs about the same as the base CTS-V but it has a full 150 less horsepower. You a fan of less powerful German sedans? Then the E63 might be a better choice.

The 6.2-liter V8 is mated to one of two transmissions – a Tremec TR6060 six-speed manual with a dual-disc clutch and a Hydra-Matic 6L90 six-speed automatic with steering wheel-mounted shift controls. The model I drove came with the automatic and I can't imagine any scenario where 99 percent of all drivers are going to outsmart this automatic.

What's it like to drive? Is euphoric going overboard? It hits 60 mph in less than four seconds. Stomp on the accelerator hard and the tires will lovingly chirp. The rear end might fishtail a bit but let off the gas and the grip quickly returns with the engine shooting you down the road. Fortunately the CTS-V sedan is equipped with Brembro brakes with 15-inch rotors up front and 14.7-inch rotors in the rear that can pull you to a stop quickly if needed.

Wondering what the interior is like? I guess that could be important to some people. It's Cadillac nice. I wouldn't say it quite matches the BMW interior but it doesn't disappoint in any particular area. My one complaint with the CTS-V had to do with the Recaro seats but that's because I'm fat. They had too much bolstered support but it wouldn't stop me from buying the vehicle and if I owned one might even encourage me to drop a few pounds.

Not to gloss over it but ride quality is also excellent thanks to magnetic ride control, which just seemed to smooth out all the bumps. You get no sense of driving long distances except by noting the fuel gauge that seems to move as quickly as the speedometer.

LG's New EV Battery Plant Is a Welcome News for Tesla
Tesla Giga Berlin's New Hurdle: It's Not Only the Gov't, but Now Tesla Itself
END_OF_DOCUMENT_TOKEN_TO_BE_REPLACED