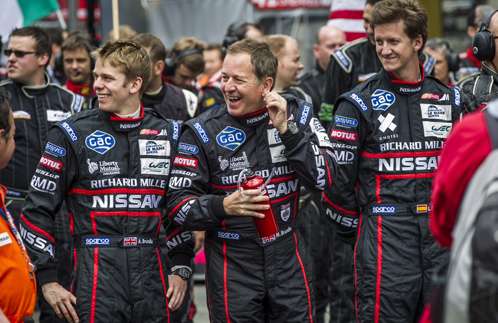 Nissan power took nine of the top 10 positions at the Le Mans 24 Hours today, rounding off an impressive week for Nissan in the LMP2 class at the world's best endurance race.
Advertisement

According to LeMans.org, "In endurance racing, teams and drivers strive to climb to progressively higher levels of competition. After learning of the discipline in the one-make formula LM PC (eligible in ALMS and ELMS), competitors can move up to the LM P2 category (Le Mans Prototype 2). It has enabled teams like Rebellion Racing (LMS vice champion 2009) and Strakka (winner of Le Mans 24 Hours 2010) to gain experience before entering the arena of LM P1."

Nissan has posted a fun video about the 24 hours of LeMans. It also highlights damage done to one of its cars. Alex Brundle, Martin Brundle and Lucas Ordonez are pictured above.

Former Le Mans winner Martin Brundle made good his return when he came home in eighth place in class with his son Alex and GT Academy winner Lucas Ordonez, according to information supplied by Nissan. The second GT Academy winner Jordan Tresson made his Le Mans debut, impressing the Signatech Nissan team with his professionalism as he powered to ninth place alongside Franck Mailleux and Olivier Lombard.

"I really enjoyed that," said Martin straight after taking the No.42 Greaves Motorsport Zytek Nissan to the chequered flag. "It was a tough race as we had an alternator belt let go in the early stages and later we were nursing throttle problems. That was a bit scary actually, especially when I went off at the first chicane. I just clipped the barrier and slid along it so luckily it was okay.

"Would I do it again?" continued Martin. "Why not? I think I would definitely do it again. I actually drove for longer than the boys and really got into the groove. I realized at the official test day just how competitive LMP2 is this year.

"If we had the reliability of the sister car we would've been cooking on gas and got a podium finish but that's the way this game goes. I'm over the moon with Al's performance and genuinely impressed with Lucas. The fantastic thing is that all three of us were well matched on pace. The ‘kids' have done an amazing job."

After finishing second in LMP2 last year, Lucas Ordonez wanted a win this year but it wasn't to be. He put up a great fight though and enjoyed his battle with fellow GT Academy winner Jordan Tresson.

"The race was really hard at the beginning as we had some issues with the car," explained Lucas. "Once we sorted these the car was really flying. We were running quite highly but lost some positions in the night as we were starting to suffer from a problem with the throttle. I had an off because of this but I was recovered from the gravel and able to get back to the pits.

"My last stint was great for me and I really enjoyed it as it felt so good in the car. The race was definitely harder than last year as the level of competition is so high. Unfortunately the luck wasn't with us this time but maybe next time."

Lucas and his teammates had a good battle with Jordan Tresson in the closing stages of the race, with the Frenchman snapping at the heels of Ordonez. "Jordan did a really great job," said Lucas. I was watching his lap times in the night and he was very good. I'm happy to see another GT Academy winner here and I enjoyed my battle with him."

‘I'm actually disappointed that we didn't finish higher up the order," said Jordan. "But I enjoyed my first Le Mans a lot. I did two quadruple stints during the race so I had to work hard to keep my focus. You can really scare yourself here if you lose concentration. I am happy with my times and I think the team was happy with my performance. I didn't break anything anyway.

"The only issue I had was during my stint early this morning. I ran into the sunrise so my clear visor didn't help me when the sun came out. I could shield my eyes along the straights but I had to do some serious squinting in the corners. I feel great after the race and would happy go in for another stint now. I've had a great week and I continue to learn more with every lap."