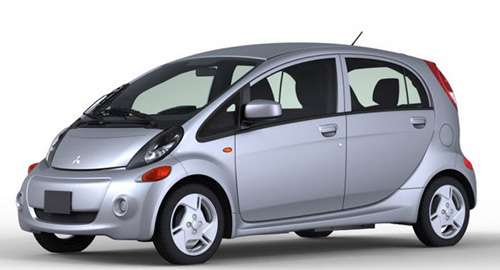 Mitsubishi Motors has unveiled its first all-electric production vehicle, the MiEV, bound for the North American market in November 2011. The MiEV (pronounced My E V) has been produced in the Japanese market since 2009 and shown at the New York Auto Show. Its release has been long expected and the model introduced at the LA Auto Show is updated from the Japanese market version with a wider body (for us wider North Americans) and required safety features.
Advertisement

The MiEV might be tiny at 144.8 inches but it has a substantial wheelbase for its size of 100.4 inches. Also, it may have only 63 horsepower but that's offset by 133 lb. ft. of torque and a vehicle weight of 2584 lbs. Plus, electric vehicles hold their charges longer when the driver doesn't use jackrabbit starts.

Based on the popular gasoline-powered "i" minicar in the Japanese market, this roomy and practical four-door 2012 model serves as the basis for the new 100 percent battery-powered Mitsubishi "i" for the North American market. The zero tailpipe emission "i" will be the first North American production vehicle to be powered by Mitsubishi innovative Electric Vehicle (MiEV) technology – cutting edge drivetrain engineering that will serve as the basis for future ultra-environmentally-friendly vehicles from the company.

It lacks conventional automotive systems including a gasoline engine, transmission and a fuel tank, having been replaced by advanced components including a lithium-ion battery system, electric motor and an battery charging system in the all-new "i". Mitsubishi said at the announcement, "This electric vehicle has already proved itself a viable and reliable form of transportation as Mitsubishi has been selling the car in its home market since the summer of 2009; production has already commenced for the European-spec i-MiEV, with deliveries beginning later this year."

Electric car fans on the West Coast get the first show at the MiEV. Mitsubishi anticipates an initial roll out of the "i" to its dealership network in the western United States (specifically California, Oregon, Washington and Hawaii) in November 2011, with entry into the northeastern market to follow by March 2012 and nationwide availability by the end of 2012. The vehicle's MSRP is expected to be around $30,000, not including Federal and available state financial incentives – assuming state and federal governments can afford to give financial incentives 12 months from now.

The new production Mitsubishi "i" bound for the North American market further differentiates itself from its Japanese- and European-spec versions with a retooled, larger body to provide even more interior comfort for four adults, along with new North American-spec bumpers front and rear for enhanced protection in the event of a collision.

Other noteworthy safety measures on the North American-spec vehicle include airbags that protect passengers and control deployment force, Active Stability Control (ASC) and a Tire Pressure Monitoring System (TPMS) - all included as standard equipment. The latter two are required in all vehicles in North America in 2012 so don't be too impressed by their inclusion.