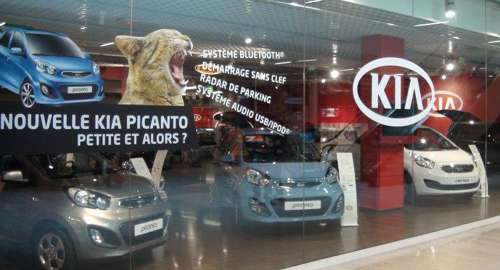 Kia Picanto on Sale at a Mall in Paris

Shopping in Paris is a fine art, which may explain why Kia is going upscale with its Picanto and selling it in a shopping mall in Paris. Befitting the bespoke nature of Paris, shoppers can customize their Picantos at the mall.
Advertisement

OK, maybe it's ethnocentric, but who even knew they had malls in Paris? Seems like the home of haute couture would sneer at such pedestrian shopping opportunities but good for Kia for making sure its Picanto is front and center for those Parisians who do like to get out and go shopping for mass-produced goods with the masses.

According to the Kia Facebook page, Kia's massive showroom in Paris will be open until February. The pictures show a place that looks like a hip car dealership. Unfortunately, little more information is available about this grand shopping experiment on regular Kia French websites or Kia's European media website.

You can tell by looking at the mall window in the picture that the French are just as concerned about mobile connectivity as Americans. The Picanto features Bluetooth and USB ports and iPod connections.

Befitting its use as a city car – and the difficulty of finding good parking spaces on the street in Paris and other European cities – the Picanto comes with a parking assist radar system. Just because it's small doesn't mean it's easy to park.

Borrowing from the Hamster playbook of the Kia Soul in the United States, the Picanto is sold in Europer with "Henry – a ‘small but mighty’ cat. Henry’s fun and inquisitive nature, remarkable agility and surprisingly big personality are used to reflect the new Picanto’s attributes." Henry, Hamster, Henry, if nothing else, Kia likes alliteration.