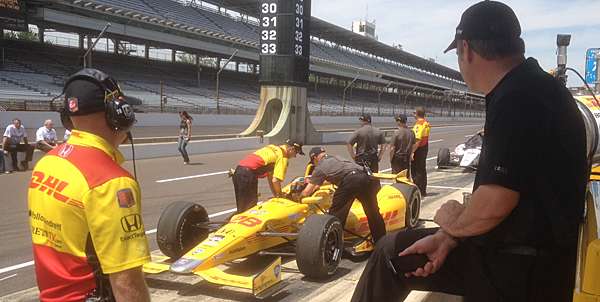 As mentioned yesterday, Firestone has invited TorqueNews to the Indianapolis 500, or as we and generations before have come to call it, the Indy 500. It's the Mecca of automotive racing and tomorrow's race is shaping up to be a great one based on Day 2 of our Memorial Day weekend visit.
Advertisement

After all, this is a day that started with Mario Andretti at breakfast, Jim Nabors and Florence Henderson before lunch, and a post-dinner concert by Jason Aldean and Tyler Farr with 41,000 of our closest friends. And, oh yeah, some kick-ass access to the behind-the-scenes world of the Indy 500 that only Firestone could provide.

Breakfast found us in a small room at the Marriott Indianapolis Downtown. Lacking fancy camera equipment (too lazy to carry it), I sit upfront to get pictures of Mario Andretti when he speaks. Even better, he sits down three chairs away from me. Inside I'm an excited 8-year old fan boy but I keep my cool when I stand up to shake his hand.

But before Mario speaks, John Baratta, president of Bridgestone's consumer tire replacement division, regales us with some interesting facts. The infield of the track could hold Dodger stadium, the Rose bowl, the Vatican, Rome's Coliseum and Churchill Downs with room to spare. Another interesting factoid is 4500 tires will be used at Indy among the 33 teams.

Baratta also manages to poke NASCAR drivers saying Indy drivers are tougher because they'll drive in the rain. He also sneaks in a plug for the new Drive Guard tire that is a run flat. It can go 50 miles and fit on most cars - not just those designed for run flat.

Then he introduces Mario, who sits uncomfortably when his record is recounted. Among the highlights:

Man, I could listen to Mario talk all day. First he talked about running the 1969 race with a stuck right rear tire that couldn't be removed the entire race. It went all 500 miles. "But I felt OK because I had helped develop it. I won that race by over a lap over Dan Guerney's Goodyear."

He also said the tire testing he did made him a better driver and recounted how his specialty was always open wheel single seaters but he had victories in NASCAR. ("It was unlikely a Yankee would win at Daytona but I did.") He also raced all over the world with Porsche and Ferrari on Firestones.

Andretti also talked about the influence the Indy 500 has. "Career wise it's unfair how important the race is. You're judged by how you perform here. You could win elsewhere and not win here and you're considered less of a driver. It's more important than winning the season," he said. "I've only won one race here but I've had a darn good time. This is the Mecca."

He talked a little bit about Sage Karan, the high school senior who is a rookie this year. Andretti said he might be here a year or two early but he's mature beyond his age. He talked about the classic rookie mistake Karan made of trying to pass a car on the corner, which put him in the wall. "But he's smart enough. I don't think Sage will be dangerous to others like other rookies can be. Has already won Indy Light races for Michael [Andretti]. He might surprise us all."

Then Mario stays for a photograph for everyone in the room and signs autographs. My internal 8-year old surfaces and gets him to sign my race credentials.

Driver's Meeting
Firestone gets us great seats to see the 33 drivers at their final driver's meeting. Jim Nabors (aka Gomer Pyle, USMC) is honored for all the years he's sung "Back Home Indiana" and thrills the crowd by exclaiming a pitch perfect "Gollleee." Florence Henderson (aka Carole Brady) is also onhand but never once says, "Oh, Alice" or "Oh, Mike." Hard to believe she's 80.

This is when we find out the potential for this being a great race on Sunday. The difference in qualifying times between 1st and 33rd is 2.5 seconds. It's the closest in history.

The best instruction given to drivers is this, "Race others as you expect to be raced at the driver instructions." It's almost biblical.

Appropos of nothing. Marco Andretti is picked the favorite by Las Vegas oddmakers. He's the only driver wearing shorts. Most favor black or dark gray, except for Pippa Mann. She's dressed in a pink polo promoting breast cancer awareness for the Susan Komen Foundation. Yet another reason to love her.

Then we're off to Penske racing, which, in addition to prepping for tomorrow's race, is also getting ready for the upcoming race in Detroit. They have Will Powers and Helio Castroneves cars to get ready. Among the facts shared are, " It's always a bad day when you need your spare car." Each car weighs 1500 lbs., runs about $500,000; carries 22 gallons of fuel, and gets 4 mpg from the 2.6 liter V6 with twin turbo

Next up is Firestone Racing.
Here's what they have to share. The wheels are made out of a magnesium aluminum alloy. They let us pick them up and sweat bullets in case we drop one. Front tires weigh 18 lbs and rear tires 21 lbs. They have sensors built in to alert teams to problems. Each tire will see about 50 laps per tire and a car will need fuel before it needs tires.

Firestone is the sole supplier for the series. No tire advantage for teams. It has been sole supplier since 1999 and has the contract until 2018.

After an indoor picnic lunch, we're off for a tour of the Pagoda, ground zero of the Indy 500. We're shown the inside of the timing room, which is staffed by 25 people for both qualifying and the race itself. It's packed with sophisticated electronic equipment fed by sensors and cameras around the track but backed up by pencil and paper in case the power goes out. (No backup generators?)

Then we're led up to the 11th floor roof. It's an amazing perspective and lets one understand how this track can pack in more than 300,000 people. Heck, it even has part of a golf course on it.

A rare treat comes when we head down. Simon Pagenaud and Ryan Hunter-Reay have both had to replace their engines. They're given 30 minutes to break them in on the track – the only race cars running on Saturday. We're just over the wall whn Hunter-Reay comes, dons his helmet and safety equipment, and blasts out of the pit. It's a thrilling moment to be that close to an Indy car in action. Consider it second to meeting Mario at breakfast.

Then it's back to Firestone Racing for an interesting by Stu Crum, president of Bridgestone Retail Operations, which has 2200 stores staffed by 23000 employees that sell 14 million tires a year. He's been on the job less than a year and his mission is to take what he considered a good operation and make it great. By 2020 he wants it to be one of the Top 100 retailers in the U.S. like Nordstrom's and Starbucks. He says the stores will no longer smell like tires.

That prompts Mike Martini, president of the OE division (basically new car manufacturers) to recall how an old timer once told him, "Tires - that's the smell of money and we love that smell."

His division also sells about 14 million tires a year with most made and sold in the U.S. Martini said tires will play a major role in manufacturers hitting their CAFE goals in the next 10 years, as well as tires playing a role in autonomous vehicles talking to the cars to tell them surfaces for example.

The day ends with the Jason Aldean concert opened by Tyler Farr. It's just me and 41,000 of my closest friends and we barely make a dent in the infield. This track is even bigger than I thought.

Follow my pics on Twitter @indepthauto and look for the wrap up Sunday night after the race.

Parks McCants wrote on May 25, 2014 - 12:49pm Permalink
One hell of a story. Thanks for taking the time and effort to bring us an up-front and personal view of the Indy 500. I was fortunate enough to meet Mario at the openining of the Ontario Motor Speedway back in 70? Damn, how could I be that old? Take care bud, and thanks for the link...