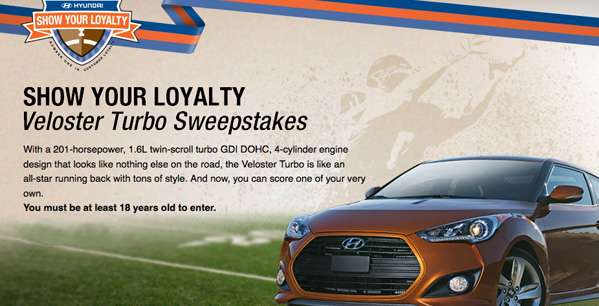 How To Win a Hyundai Veloster Turbo

Hyundai is sponsoring a contest called, "Show Your Loyalty: Hyundai Veloster Turbo Sweepstakes." Here's the official entry website for you to start on your way to winning one.

But before we start down that road, lets take a moment to look at the Hyundai Veloster Turbo. In my humble opinion, it's a blast to drive. With only three doors, the compact Veloster Turbo just eats up twisty roads and deports itself well on straightaways thanks to a 201-horsepower, 195-lb. ft. of torque, 1.6-liter, four cylinder turbo engine.

TorqueNews.com managing editor Patrick Rall had this to say in his Veloster Turbo review, "From a stop, the Veloster Turbo pulls hard through the gears with surprisingly little wheel spin or torque steer, allowing this hot hatch to make good use of the power.

"Many compacts that pack power in this range can be hard to launch but even with the quick spool time and the relatively “instant on” power band, the Veloster Turbo doesn’t blow away the front tires like some of the competitors. This is a car that you can launch hard and it will come off the line just as hard with any wheel spin being minimal before the tires track and rocket you up through the revs."

Plus, it's not a horribly expensive car for all of its performance (and it can seat five in a pinch – literally a pinch if their anybody above a 28-inch waist). The Veloster Turbo starts at $22,895 for the six-speed manual model.

But you're not worried about price because you want to win one. Start off by going to the link above to the contest website. You have to be 18 to enter. (Here's the link to the official rules if you're into that sort of thing.)

First step is entering all of your required information. I did it. It's easy. If you don’t know your personal information you probably shouldn't be driving. Best part is you can opt not to receive more info about Hyundai products but I clicked it anyway.

And that's it. You're on your way to possibly winning a Hyundai Veloster Turbo. What could be better?

By the way, what is the Loyalty Report? For the uninitiated among you (myself included), that would be The Post Game's Loyalty Report blog over at Yahoo Sports. The current posting there pretty much trashes Washington State before its recent game against Arizona. Washington State beat Arizona 24-17, so loyalty may be all nice and good but it don't mean a thing when your team gets trumped by a school with a losing record.