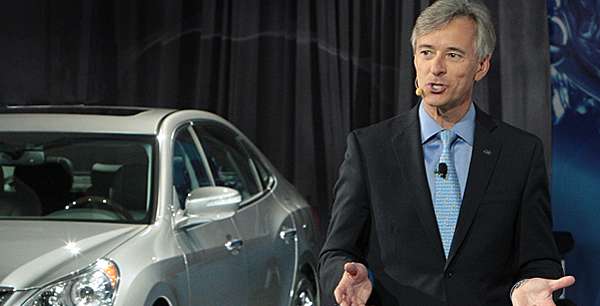 John Krafcik, the popular former president and CEO of Hyundai Motors America has surfaced in an unlikely role: director for a car selling website.
Advertisement

According to an announcement from TrueCar.com, "TrueCar, the negotiation-free car buying platform, today announced John Krafcik, former Hyundai Motor America President and CEO, has been named to TrueCar's board of directors. Krafcik, who led Hyundai to record sales and boosted the automaker's U.S. market share by more than 50 percent during his five-year (2008-2013) tenure, will join as director and also serve as a member of the board's operating committee."

Krafcik told the Wall Street Journal that "his role at TrueCar, based in Santa Monica, Calif., won’t be his only job, he said. 'I left on great terms with Hyundai. I still call them and they call me.' During the past three months, he said he has been doing consulting in Silicon Valley, China and other locations. 'It’s helped me understand what I might want to do, full, full time. I am just taking things at the appropriate pace,' he said."

The personable Krafcik joins a website in transition. According to the Journal, "TrueCar has had a renaissance since going through a crisis in 2012. The service was growing quickly, selling the notion to buyers that they could get the lowest price possible for cars. It tracks purchases of vehicles and shows consumers what the highest and lowest price people paid for a car in their area.

"Dealers began to complain that consumers were demanding prices that were so low they couldn’t make money and the company lost thousands of customers, and even drew attention from some state regulators saying the service violated consumer protection laws. The company was losing money and needed a cash infusion from investors to survive."

A major cash infusion just came to the company via Microsoft co-founder Paul Allen's Vulcan Capital. According to the Journal, it made a $30 million investment in the company late last year and TrueCar is said to be considering an initial public offering this year.

No details on compensation were announced but joining a company before it goes public could significantly fatten Krafcik's wallet. The role also keeps him in front of the auto industry and gives him extensive dealer contacts much greater than in his role with Hyundai.

One automotive journalist suggested Krafcik could be tapped to head up Alfa Romeo's efforts in the U.S. It's also been suggested he could oversee Chrysler's U.S. operations so Sergio Marchione wouldn't have to run companies on two continents.

Steven Proto wrote on April 6, 2014 - 11:46am Permalink
This and some key other factors might just be the shot in the arm True Car needs. There is definitely a platoon of talent at True Car combined with founder Scott Painter's resume including the legendary carsdirect.com and zag car dealer propelled sites that increase consumer traffic to automotive dealers in the ever voracious digital marketing frenzied world. The players include such heavy weights as the Cox Communication dynasty which owns the likes of Kelley Blue Book, Autotrader.com and Manheim Auctions (largest dealer auction worldwide) and other players including newspaper giants such as Cars.com (second largest automotive car buying site). With such behemoths in the ring you must give credit to CEO Painter for his knack and ability to restructure his platoon and round up the troops engaging for battle as this veteran has done over and over with tremendous success. Organizing good key people is fundamental in the cut throat automotive business and Painter might have found the headlights at the end of the tunnel. When a colossus like General Motors is busy scrambling to hire heads of state only to salvage what's left of a treacherous mess credit is due to companies like True Car who are able to weather the storm and reinvent themselves in the face of adversity. We will see in the next twelve- twenty four months if another cars direct will turbo the auto marketplace. I'm anxious, but then again, I'm a lug-nut.