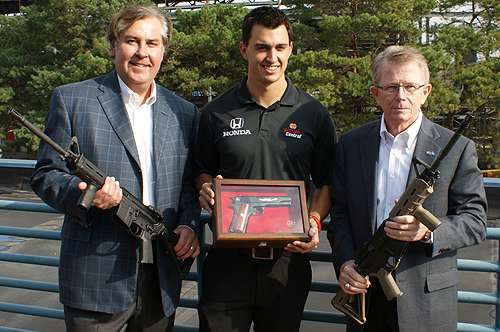 The worlds of gun aficionados and IndyCar fans come together with the donation by Colt Defense of three firearms, including a a uniquely customized 100th Anniversary model of the Colt 1911 pistol, highly engraved to commemorate the 100th anniversaries of both the Indianapolis Motor Speedway and Colt's M1911. It's all part of the eBay charity auction benefiting the family of IndyCar driver Dan Wheldon who was killed Oct. 16.
Advertisement

The death of Dan Wheldon continues to reverberate hard through the Indy Car community and even with casual fans. When TorqueNews visited the Las Vegas International Speedway recently for the launch of the Lexus GS 350 and Lexus GS 450 hybrid, his specter hung over the track with the reminder that a talented young driver had been killed there just weeks earlier.

Colt announced the donation of a custom Colt M1911 pistol, as well as two Colt LE6920MP rifles, to the Dan Wheldon Memorial Auction. The custom 100th Anniversary model of the M1911 is highly engraved to highlight the 100th anniversaries of both the Model M1911 handgun and the Indianapolis 500. The donated LE6920MP rifles represent two color variations of a new line of Colt rifles for 2012 that come standard with several Magpul accessories.

“We are proud to put these items up for bid to help contribute to the Wheldon family and honor Dan’s legacy,” says David Ridley, Vice President, Colt Defense LLC, “The highest bidder on the 1911 will own something that is truly one-of-a-kind and the winner of each rifle will hold one of the first guns from this brand new line.”

The donated Colt M1911 is a 100th Anniversary model of the pistol, which is available only in 2011. This gun features several unique customizations that highlight the 100-year anniversary of the Colt M1911 pistol and commemorate the 100th Anniversary of the Indianapolis Motor Speedway. The gun’s slide features a silver-plated engraving of the Indianapolis 500 trophy. The gun is finished in Polished Royal Blue and has Cocobolo grips that feature gold-plated C100 medallions. The 1911 pistol will also ship with a walnut glass case etched with the Serpentine Colt.

The gun’s special serial number, 98INDY500, memorializes Dan Wheldon’s car number when he won this year’s Indy 500. “Because this gun is so very unique, I cannot even begin to say what it might appraise for or the amount it might garner in this auction,” said Ridley.

The two donated rifles represent the first line of products that Colt Defense and American firearm accessories maker, Magpul, have developed together. These rifles feature Colt’s popular 6920 Law Enforcement Carbine at the base, with several Magpul accessories added as standard equipment.

The Dan Wheldon Memorial Auction was established for the family of the late Dan Wheldon, two-time Indianapolis 500 winner, who died in a race accident on Oct. 16, 2011. The auction began when Graham Rahal, fellow IndyCar racer, offered to auction his own helmet, gloves and shoes worn in the race in which Wheldon died, to raise money for the family. To bid on these Colt firearms and contribute to the trust fund, please visit http://www.gunbroker.com/auction/SellerAuctions.aspx?User=2006466. The auction will close on Sunday, Dec. 18, 2011. As of 1 p.m., Dec. 9, there was only one bid on each weapon with a high bid of $1500 for the Colt M1911.

Toyota's First EV Will Have a Name of BZ: Toyota BZ
First Videos From Inside The Boring Company's Las Vegas Loop
END_OF_DOCUMENT_TOKEN_TO_BE_REPLACED