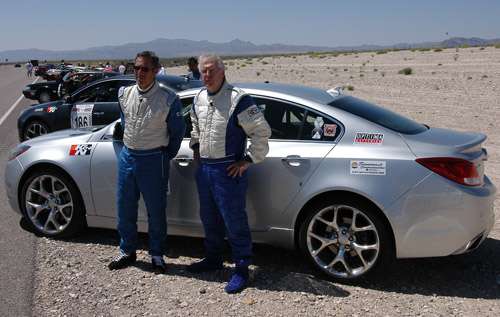 A 2012 Buick Regal GS has been tapped going 162 mph on the open road – and it's all perfectly legal.
Advertisement

A pair of Buick engineers piloted a stock Regal GS luxury sport sedan to a second-place finish in the 135-mph class of this month’s Nevada Open Road Challenge, finishing within 0.4 seconds of their 40-minute target time. The podium finish follows a first place title claimed by the same team – driver Bill Rietow and navigator John Townsend – in the 120-mph class last fall.

Success was based on balancing low-speed sections of the course with running the Regal at top speed for a period of time. During that segment, a radar trap controlled by race operators verified a speed of 162 mph for the 270-horsepower Buick. The Regal's 2.0-liter turbocharged engine was named one of WardsAuto World’s 2012 “10 Best Engines” for North America.

Now it's probably time for some kind of disclaimer. Don't try this on open roads. Closed course with a professional driver as the car manufacturers are fond of posting on their TV commercials (even when showing a car being driven normally down the highway).

The top speed was reached as part of the Nevada Open Road Challenge takes place on a remote, two-lane, 90-mile-long segment of Nevada State Highway 318. Rather than a test of who finishes a course the fastest, the goal is average speed consistency. Podium finishers often are separated by hundredths of a second.

The Regal GS piloted by Rietow and Townsend was a stock 2012 model, with modifications limited to safety equipment such as a roll hoop and five-point harness seat belts, as well as data collection computers.

The Nevada Open Road Challenge is run by Silver State Classic Challenge Inc. On its website, it accurately describes the experience as a Walter Mitty dream. "The State of Nevada closes down 90 miles of Route 318 and more than 200 drivers from around the world converge on the little town of Ely in the central high desert of Nevada. Why do they come? To experience first-hand the adrenaline rush of driving flat-out on a public highway. Not just professional racers, but men and women from all walks of life, pursuing the … dream of speed, horsepower, and high performance. Yes, there’s a place for everyone in the Silver State Classic Challenge events."

The event has two Guinness World Records for fastest road race and fastest speeds on a public highway. More information is available at the competition's website.

By the way, similar 2012 Buick Regal GS can be bought at a local Buick dealership. The manufacturer claims not to have tinkered with the car in any way to reach 162 mph.