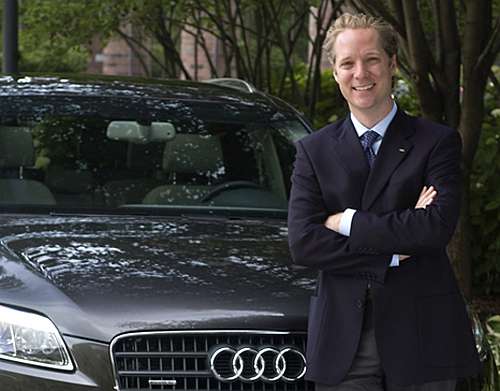 As the old saying goes, "Don't let the door hit you on the way out," which seems to be the message Audi is sending to its former U.S. president by quickly naming his replacement.
Advertisement

The German automaker looked not to a product guy but a marketing executive when it made the announcement that Scott Keogh will assume the top leadership role for Audi brand activities across the U.S. effective immediately.

He replaces Johan de Nysschen who was with Audi for 19 years. During his tenure he served in executive positions in South Africa, Japan and most recently as President of the brand's American operations. He announced his resignation at the end of May before quickly announcing he was appointed as senior vice president of Nissan Motor Company in charge of the Infiniti division effective July 1.

Keogh comes into the job with experience of six years as Chief Marketing Officer at Audi of America. In that position, he led all product planning for the U.S. market in addition to award-winning marketing and advertising campaigns that helped Audi of America achieve record levels of consumer awareness and consideration.

A strong advocate for Audi performance and efficiency engineering, Keogh helped steer the introduction of Audi TDI clean diesel technology to the U.S. market by positioning it as a social cause rather than a mere engine variant. He developed the strategy to re-introduce RS performance models, including the new RS 5 coupe coming to dealerships this year, to the American premium sports car segment.

Keogh also advocated for the return this year of the iconic Audi allroad, as part of a strategy that has resulted in 14 new Audi model launches for American consumers since 2006. (TorqueNews is traveling to Colorado next week to drive the new Audi allroad.)

The marketing exec takes over at a good time. The Audi brand has established sales records over the past 17 consecutive months, culminating in an all-time annual record of 117,561 premium performance models sold nationwide in 2011. That topped the previous annual sales record of 101,629 Audi vehicles sold in the U.S. market just one year earlier.

Among the Audi brand accomplishments led by Keogh – each with its own portion of risk and unconventional thinking for the segment, according to an Audi press release – have been early awareness-building exercises such as the Truth in 24 documentaries about the Audi dominance at the 24 Hours of Le Mans endurance race; bold Super Bowl advertising; a significant push into social media; and integration of Audi into blockbuster Hollywood productions, such as the Iron Man movie series.

No replacement has been announced yet for Keogh. The company recently named Joe Jacuzzi as chief communication officer after the departure of Jeff Kuhlman for Nissan in Japan.

Audi Atlanta wrote on June 27, 2012 - 7:38am Permalink
German Engineering has a different case of authentication basically in the automobile industry.