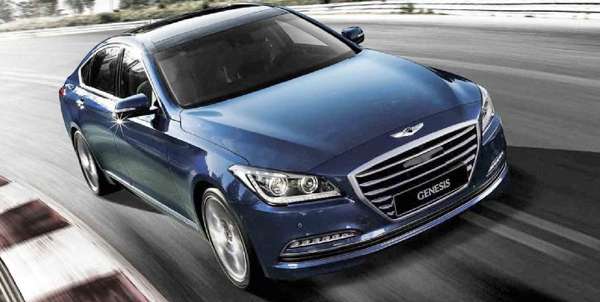 2015 Hyundai Genesis Debuts Twice - Inside and Out

Hyundai reached out to TorqueNews.com to clarify our earlier article on the debut of the Hyundai Genesis in Las Vegas. Only the interior is going to get its debut in Las Vegas. The exterior debuts in Detroit at the North American International Auto Show as originally planned.
Advertisement

Just to give a little bit of the backstory, I posted an article on Dec. 11 on Why the Hyundai Genesis Debuts a Week Early in Las Vegas at a media-only event being produced by PepCom. (It's a company that puts on new product programs for technology writers around the world.)

In the article, I spoke about technology's prominence in the car world and that's why it was important enough for Hyundai to unveil the 2015 Hyundai Genesis a full week before its North American debut in Detroit. Turns out I wasn't entirely correct because the outside's not going to be unveiled – only the inside.

How's that you might wonder? Miles Johnson, manager of connected car publicity, called to explain that the outside of the Genesis is going to be wrapped so people can't get an actual look at the exterior. He also said it's going to be disguised in a way that you won't be able to unveil its true shape.

That might seem a bit odd because there have been lots of what I could only consider official looking photos published already, including those in a gallery at Automobile magazine where the 2015 Hyundai Genesis sedan is reviewed. Tell me those first three photos weren't supplied by Hyundai.

The interior is going to be up for grabs, though, and the pictures posted it at Automobile magazine show it to be a beautiful space but more on that later. So, why open up the inside and not the inside? Basically, not to piss off totally all the automotive journalists who are sick of seeing full reveals of automobiles they expected to see at the same time as everybody else.

Then two things happened. Ford decided to unveil the Mustang on Good Morning America, which set the auto journalists to grumbling because the great unwashed masses would see it at the same time as them. No print or web journalist likes to be scooped by television of all media. (We'll accept radio, of course.)

Then Auto Week, which is published every other week but doesn't want to change its name to Auto BiWeekly, broke a major embargo when photos from its print edition ended up online for the whole world to see. Needless to say that took the wind out of Ford's sails.

The PR folks at Hyundai are smarter than that – not to suck up, but a lot smarter, which is why some of them probably left Ford. They don’t want to alienate the A-list automotive press, one of whom grumbled privately to me: "Should I cancel my plans for Detroit?" He felt the unveils were taking place ahead of time so why the hell should he be in wintry Detroit when he could stay home?

It's for the parties of course, but I digress. The real reason to be there is to see the cars in the flesh because it honestly makes a huge difference. Even though Good Morning America showed the Mustang to the world, it was different being able to see it and touch it.

But as mentioned above, technology journalists are only going to be able to see and touch the interior of the 2015 Hyundai Genesis at the Consumer Electronics Show pre-event party. They will only gaze upon a camouflaged exterior as they scurry to see the BlueLink head unit and all of its new technology.

What are some of those features? Here is what the new 2015 Hyundai Genesis will feature when it comes to new technology:
* Next-generation Blue Link with destination search engine powered by Google
* Genesis Intelligent Assistant app
* aha, SoundHound and Pandora integration with smartphone
* Hyundai Assurance Connected Care powered by Blue Link
* All-new infotainment system with: