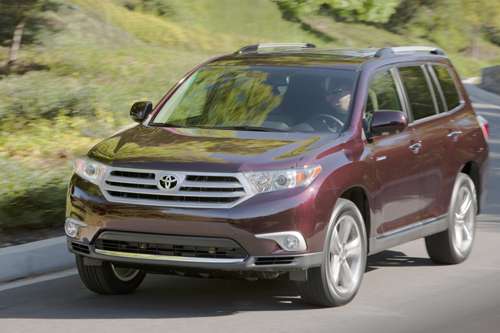 It's easy to underestimate a vehicle's capabilities – to take it for granted. Such was the case with the 2011 Toyota Highlander. It was a crossover utility vehicle that seemed to have been passed by other more worthy competitors.
Advertisement

But then something happened to change that point of view – the Nor'easter that decided to strike the Northeast right before Halloween and wreak incredible amounts of havoc. Through it all, the Toyota Highlander was a performer discouraged by nothing.

The early arrival of heavy, wet snow? It safely delivered me, and more importantly, my six-year old daughter, to and from a piano recital. The next morning after snow had blanketed local streets the all-wheel drive model loaned to me by Toyota gamely brought us to first communion class – only to discover the church building was without power.

It was an affliction that would strike us four hours later after foolishly thinking we had dodged the power-devouring bullet. With two young children we decided to head to the Connecticut shoreline about 40 miles away to pack into a hotel room for two nights across the hall from their aunt and grandmother.

The 2011 Toyota Highlander effortlessly swallowed all we had to throw at it for cargo with ample room left over thanks to 42.3 cubic feet of space behind the second row. Unfortunately, the day before it had been host to a week's worth of groceries that would have to be discarded when the power returned. Fortunately, we don't leave near bear country.

Under the hood is the 270-horsepower 3.5-liter V-6 that was a comparative gas sipper as we traveled back and forth from hotel to home and back to hotel for our daughters who slept in comfort with their aunt and grandmother while my wife and I moved back to a powerless home. The 2011 Toyota Highlander with all-wheel drive is rated at 17 mpg and 22 mpg city. We had no problems hitting a combined 21.6 mpg in a week of mostly highway driving that did include patches of inclement weather.

That's where the snow setting on the Highlander came in handy. It would ease the vehicle off in second gear to avoid wheel slip. The sport setting was ignored. Also not put to the test was the corner-braking feature (kids were onboard most of the time). It harnesses the integration of the vehicle’s dynamic control systems and limits brake pressure on inside wheels during cornering to help enhance control through the turn.

There's another feature I loved quickly: the combined rear defroster/side mirror defroster. Hit one switch and both tasks are done quickly. It's a little touch that just came in so handy.

A five-speed electronically controlled automatic transmission (ECT) offers selectable manual sequential shifting that was never engaged. Toyota should make the transition to a six-speed soon for better highway mileage from the Highlander's V-6.

Fortunately, we never had to test any of the safety equipment but the Highlander has plenty that comes standard including seven airbags. These include advanced driver and front passenger airbags, front seat-mounted side airbags and a driver's knee airbag. Roll-sensing side curtain airbags help to protect the occupants of all three rows in the event of certain side collisions or vehicle rollovers. Additionally, all Highlander models are standard equipped with front active headrests.

When you're wrestling with the after-effects of a major storm like we did in New England practicality is more important than looks, but the 2011 Toyota Highlander did get some updates for this model year. It has revised styling with new front fascia, hood and fenders. Three-row seating with rear climate control has also become standard.

The new Tech Audio is standard for SE and Limited and optional for Base grade and features a USB port, integrated XM Satellite Radio (includes 90-day trial subscription) and Bluetooth®, helping ensure a wide array of “connected” capabilities for passengers.

Pricing for the base 2011 Toyota Highlander with front-wheel drive starts at $28,090. The all-wheel drive Highlander that so ably shepherded me and my family during a frustrating week goes for $38,144 with the $810 delivery charge thrown in. It's a price I would consider paying after seeing just how dependable this crossover utility vehicle is. You just can't beat its dependability.

(For the latest new car news, follow me on Twitter at aboutusedcars. You can also learn about buying and selling a used car at UsedCars.About.com.)

Toyota vs Tesla: Which Stock To Buy These Days
For Some Former Daimler Managers Daimler Is Authority, While Tesla Is Like a Startup
END_OF_DOCUMENT_TOKEN_TO_BE_REPLACED