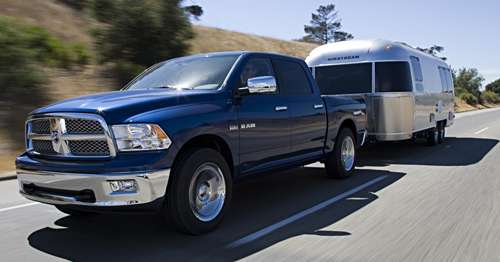 The best pickup truck for $30,000 is the Ram 2011 1500 Quad Cab Hemi according to a recent comparison test against Ford, Chevrolet, Nissan and Toyota pickups. Let the debates begin among the fan class for each truck.
Advertisement

After all, by sheer numbers the Ford F-150 continues to be the top selling vehicle – not just pickup – in the United States. Fans of the Chevrolet Silverado are also legion and jumping up and down in the background desperate for attention would be fans of the Toyota Tacoma. But now fans of the Ram 1500 Quad Cab Hemi have the bragging rights thanks to the win at PickupTrucks.com first value comparison event.

Well, OK, maybe there's no dedicated fan base for the Nissan. Quick can you even name the Nissan pickup? We had to look it up. It's called the Nissan Titan.

Pickups are hugely important vehicle to Ford and pickups in general are showing strength as TorqueNews.com managing editor Patrick Rall reported in his article Ford Reports Truck Sales Continue To Grow: "Ford, Ram, GMC and Chevrolet have all been having strong years in terms of pickup truck sales and with the trucks currently accounting for 13% of new vehicles sold in the US this month; this is the strongest month in relation to the rest of the industry for pickups since December 2010."

"This test is an overwhelmingly strong third-party validation of Ram Truck's Value for the money and proof positive that we are meeting the needs and expectations of our truck customers," said Fred Diaz, Ram Truck Brand president and CEO – Chrysler Group LLC, in an announcement. "The Ram 1500 Quad Cab is one of our most popular models. Ram Quad Cab gives you four full doors and seating for up to six adults. Equipped with the 5.7-liter HEMI V-8, the Ram 1500 balances 20 mpg fuel economy with the performance and capability of 390 horsepower and 407 pound-feet of torque. Ride comfort is also exceptional, thanks to a Ram 1500's segment-exclusive coil spring rear suspension."

The validation is important because the Ram 1500 is still struggling to get a foothold in the pickup truck market. Ram doesn't break out sales by model but it had overall sales of 21,243. F-Series, America’s best-selling truck for 34 years in a row, posted August sales of 48,795 (also not broken out). Chevy Silverado sales were 36,832 in August. Toyota Tundra sales in August were 6752 units while the Nissan Titan saw sales of 2355 vehicles.

Entries were judged on towing capacity, performance, handling, styling and fuel economy. "The Ram was the overall winner because rather than being a standout in any one category, it did well across the board," said Mark Williams, PickupTrucks.com Editor. "In a contest so focused on value, the truck that does well in the most overall categories is likely to come out on top. The Ram not only outperformed the other four trucks, but also has the fewest sacrifices or compromises, feature-wise. That's exactly why it won.

"This shootout was all about best bang for your buck," added Williams. "With money being a major concern for everyone right now and pickup trucks being the best-selling vehicles in the country, it was important for the focus of this shootout to be about value over anything else."

The 2011 Ram 1500 was named a Consumers Digest Best Buy and AUTOMOBILE Magazine All-Star. Ram 1500's smooth-riding suspension and 20 mpg, 390 horsepower HEMI® V-8 are just two of the reasons it beat the competition. Ram 1500 also was named the Truck of Texas by the Texas Auto Writers Association in 2011.

OK, so the Ram 1500 is winning the beauty contests. Now it just needs to win the pocketbooks of consumers and it might stand a fighting chance.